Roosevelt dimes have been around since 1946, and they’re usually lugged around as pocket change. Not only are these coins easy to find, but they’re also inexpensive, be they circulated or uncirculated.

However, there’s an exception to every rule, and one of those exceptions is a specific subtype of the 1996 Roosevelt dime. So, do you happen to have in your possession that rare type of the 1996 dime? If so, how much is it worth?

Keep on reading, and you’ll discover all the possible values of this currency.

Overview of the 1996 Roosevelt Dime 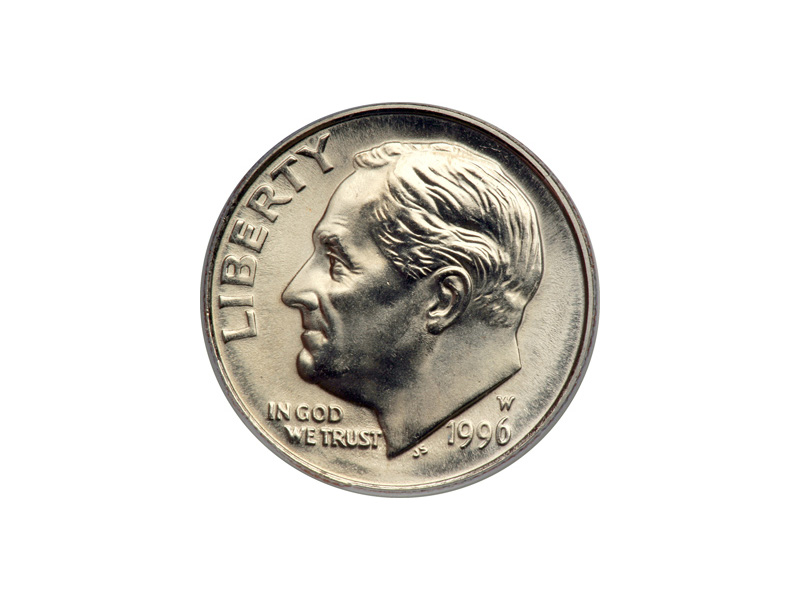 Now, the Roosevelt dime was minted by the United States Mint in three different locations: Denver, Philadelphia, and West Point. The West Point variety was the first-ever dime to have a “W” mintmark, as the West Point Mint facility typically only produced bullion coins.

However, in 1996, the “W” dime was minted as a surprise for coin collectors to mark and celebrate the 50th anniversary of the Roosevelt dime. Now, this non-bullion coin wasn’t intended for general circulation, so, at that time, collectors could only acquire it by buying a special edition uncirculated coin mint set.

As such, even though the “P” and “D” varieties of the 1996 Roosevelt dime are relatively common currency, the coin with the “W” mint mark is considered a rare coin and is worth so much more than its face value.

Finally, know that the 1996 Rosevelt dime also had a proof issue and a silver proof issue, which are, again, much less common than their “P” and “D” counterparts and have a slightly higher value.

Description of the 1996 Roosevelt Dime 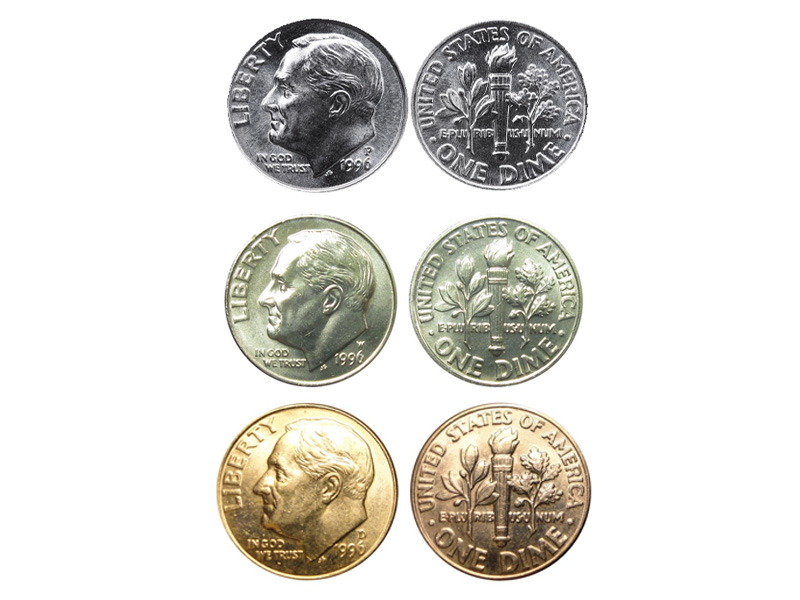 The “P,” “D,” and “W” 1996 dimes were made of a clad material, meaning they had a solid copper core and a nickel/copper mixture for the outside layer. The clad proof coins (“S” dimes) were also made of the same material, but the silver proof dimes were mostly made of silver.

On the obverse side of the Roosevelt dime, you’ll find the words “Liberty” and “In God We Trust,” in addition to the initials “JS,” which stand for “John R Sinnock,” the designer of the coin.

You’ll also find the date and the mint mark spread out around the face of President Franklin Roosevelt.

Meanwhile, on the reverse side of the coin, you’ll find an image of a torch with two branches on either side. The top will read “United States of America” with “E Pluribus Unum” written in the center and “One Dime” at the bottom.

So, now that you know the different types of the 1996 dimes, let’s look at what each one will be worth at an auction, shall we? 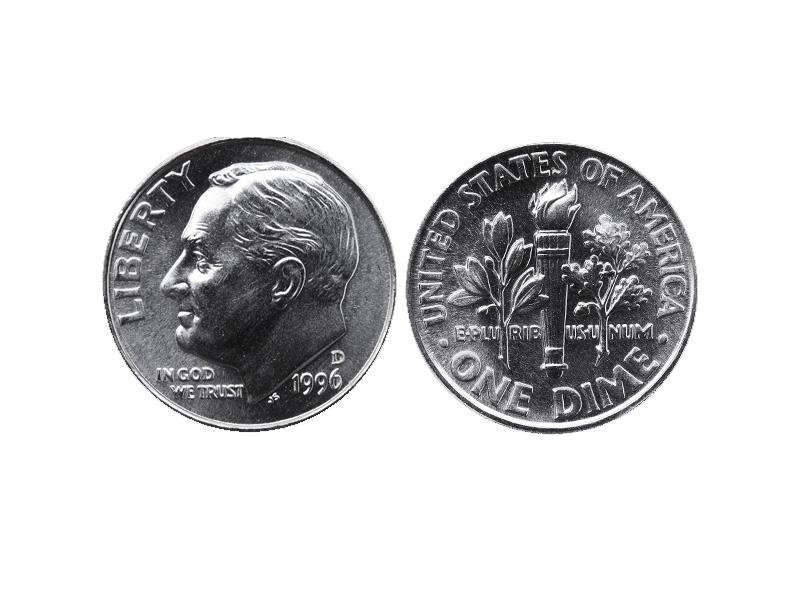 It’s currently worth anywhere from 10¢ to $2, depending on its condition. So, if your coin has signs of wear or aging, it’ll be sold at its actual face value. However, if it has an MS+ certification, it can sell for 2 or $3. 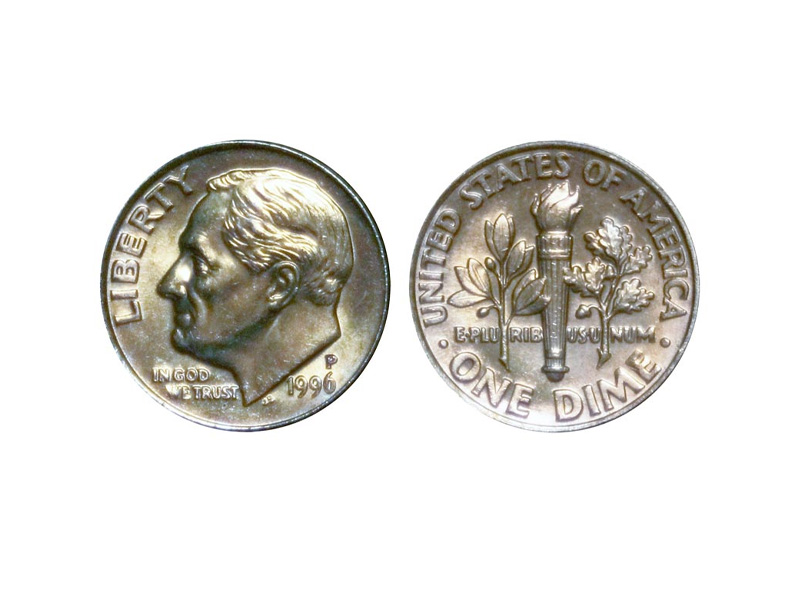 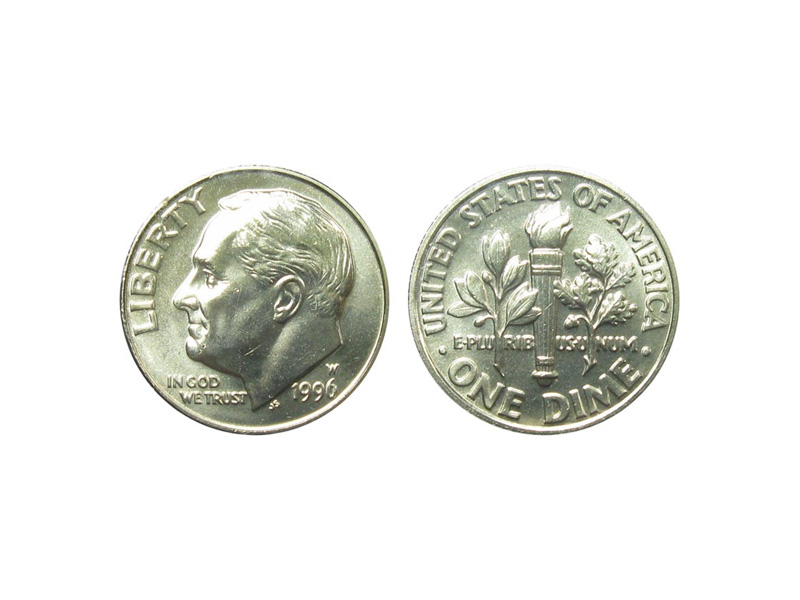 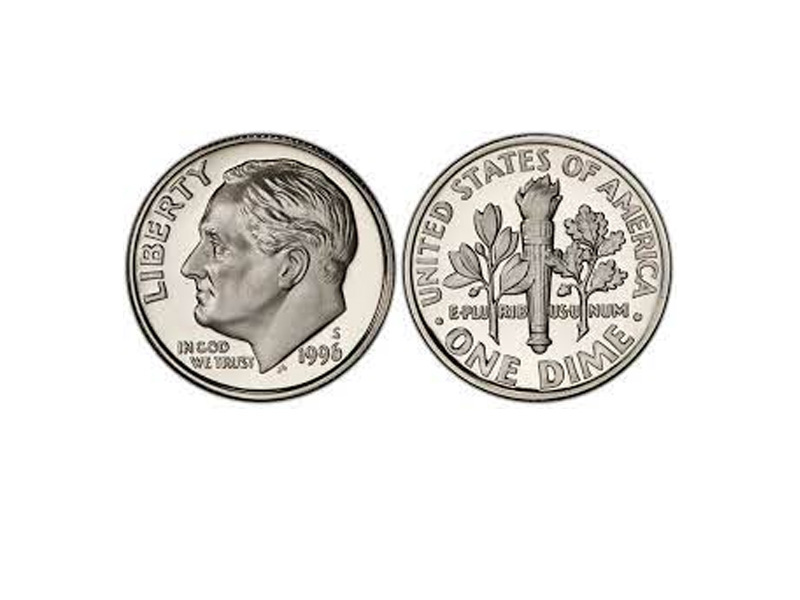 Proof coins don’t enter the general circulation and are made especially for collectors. Accordingly, they’re much more detailed than the standard dimes, but they’re made of the same material. 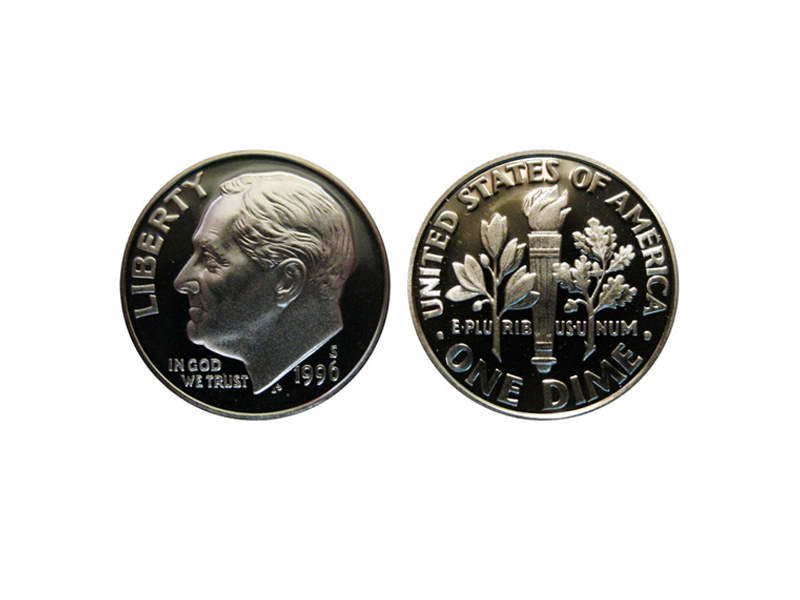 If you’re interested in buying this coin or if you wish to sell it, know that it’s currently valued at $8-10 and that it was minted 775,021 times at the San Francisco facilities.

To sum up, the standard 1996 Roosevelt dime specifications are as follows:

Similarly, the “S” silver proof dimes are considered valuable coins, though not as much as those with the “W” mint mark. Still, they’re estimated to be worth $8-10, and you can get a price equal to their weight in silver when they are melted.

So, if you’re interested in adding a 1996 dime to your collection, make sure to know what each mint mark is worth so that you can get the best offer possible.