Any collector knows that Lincoln pennies are widely popular. After all, they’re almost as old as the mint that produced them. But can we say the same for the 1947 Lincoln wheat penny? And how do the values differ across its varieties? Read on to find out just how valuable this coin is.

On average, a 1947 Lincoln wheat penny can be $0.05. But its condition makes all the difference. For instance, uncirculated pennies in mint condition are estimated at $1.11 to $3.22, perhaps even more. Also, to determine a 1947 Lincoln penny value, you need to identify its mint, confirm its date and mint mark variety, and grade it. 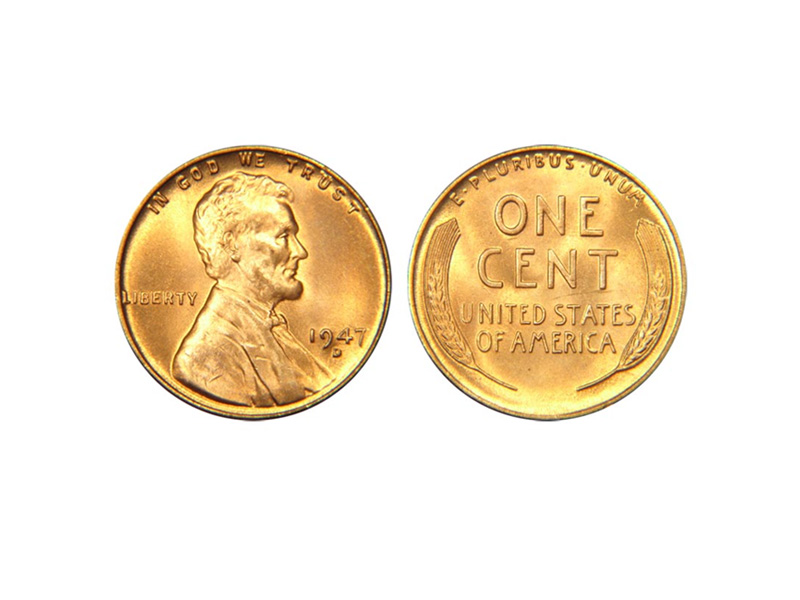 If you look at the coin’s adverse side, you’ll see a detailed image of Abraham Lincoln at its center. Above him, the words “In God We Trust” are inscribed in a curve.

And there are inscriptions to both his sides, which make for a balanced design. On the left, the inscription reads “Liberty; on the right is the year of minting, 1947.

If you flip the coin to its reverse side, you can read two inscriptions: “United States of America” and “One Cent.” And the Latin phrase “E Pluribus Unum” towers over them.

As for the right and left outer edges of the coin, they feature wheat stalks each; hence, the coin is referred to as the “wheat penny”.

We’ll estimate how rare the 1947 penny is in the three mints: the Philadelphia mint, Denver mint, and San Francisco mint. Here are the mintage figures:

This was enough to deem the 1947 penny abundant on the rarity scale. It was also enough for the coin to survive because many cents were saved from circulation.

As for the second mint, Denver outdid Philadelphia, the main mint, striking 194,750,000 cents. Like their precedent, these cents are also abundant.

And we can thank San Francisco, as it minted 99,000,000 coins in 1947. That number made the coin pretty available today and also abundant on the rarity scale.

Nevertheless, mistakes were found in a few of the countless pennies struck in 1947, ones that quality controls didn’t detect.

On the coin’s reverse side, you may find a lamination defect due to a default in the alloy mixing, annealing phase, or rolling phase.

Such a dramatic error raises the coin on the rarity scale and in value, making it uncommon.

Moreover, it makes the coin interesting, instigating collectors to appreciate the level of perfection required for the production of millions of the exact coin. 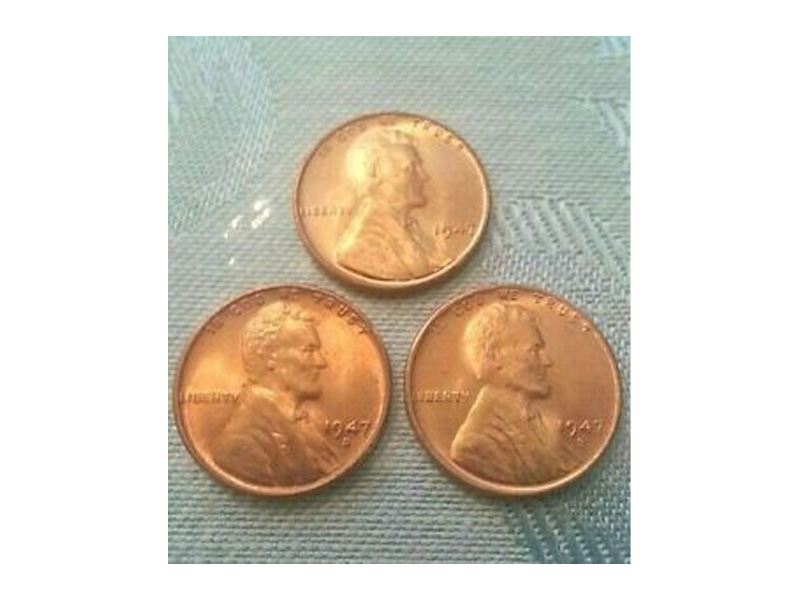 Now that you know just where these wheat pennies stand on the rarity scale, let’s discuss their values and how the mintmark makes a difference.

For example, a worn 1947 penny from Philadelphia costs 3 to 10 cents. As for Denver and San Francisco, they’re more valuable because of their mintmark. However, we can’t go into further details without evaluating these coins’ conditions.

Now that you know just how much value these wheat pennies hold, you should know that some pieces of the same mint are more valuable than others. That’s why grading makes all the difference in the Lincoln penny value.

The most pristine coin is an uncirculated one. These pennies have never entered circulation, so they weren’t handed from one person to another. Undoubtedly, they’re an excellent addition to your collection.

To illustrate, they don’t feature any wear on their reverse or obverse side. And they have ample details, such as strong features of Lincoln, intricate details of his hair, and fine lines of wheat stalks. Not to mention, they have a luster to their surface.

Tip: An easy way to spot an uncirculated 1947 Lincoln coin is to check the coat line between Lincoln’s shirt and neck. Since this is a high point, it should be visible without any dulling in an uncirculated penny.

Of course, a bright 1947 Lincoln coin with original luster and no darkening is the crème de la crème, having the highest value. But then, the darker a 1947 penny gets, the less valuable it is. And although the coins’ color may have faded a bit with time, they’re still in mint condition.

Like uncirculated cents, pennies in extremely fine condition have probably never been in circulation and are in high demand, but they’ve endured some damage. We’re talking minor flaws that you can’t spot, like tiny scratches.

Of course, the grading process can identify the few errors and imperfections in the obverse or reverse sides of these nicer coins. You can distinguish lightly worn examples from their highest points, as they may have slight flattening. However, the line of Lincoln’s coat should still separate the shirt, neck, and bow tie.

Now, let’s go over the penny value of these extremely fine cents. A 1947 penny from the Philadelphia mint is worth 0.04, and so is one with the Denver mint mark. However, the San Francisco extremely fine coin is estimated at $0.05.

Tip: If you’re starting out with collecting rare coins, you’ll find that a 1947 Lincoln penny with the D mintmark is a nice and affordable way of building your collection.

You can find old wheat pennies in fine condition, which have been circulated a lot but just happened to avoid damages. But they can also be ones that people were circulating for some years before someone decided to safe-keep them.

As a result, you’ll see that they’ve suffered some slight scratches and their surfaces have been smoothed a bit. Otherwise, the raised parts of these cents have remained intact.

When it comes to pennies in fine condition, a Philadelphia coin with no mint mark’s value is $0.02. And the same goes for coins with the Denver mint mark. Finally, pennies with the San Francisco mintmark cost $0.03

Where a fine penny may have been circulated for a few years, a good one has been in circulation for a long time, and you can see it. So, many minor and major details have been flattened.

In addition, this 1947 penny may feature deep scratches, complete smoothing of any raised elements, and other signs of wear and tear.

With regards to the penny value of these pennies in average condition, the ones minted in the Philadelphia and the Denver mint are worth $0.02. As for the San Francisco one, its pennies cost $0.03.

What Is the Most Valuable 1947 Penny?

It’s a coin that was sold for $9,200 in 2002. It’s in a certified mint state of 67, flaunting its original red copper color. And the Professional Coin Grading Service (PCGS) certified it. Other similar coins in the mint state have been well preserved, and these cents amounted to $1,000 or even more.

Ultimately, when judging the penny value of a 1947 penny and its varieties, you need to consider mintmark and coin condition.

Due to large quantities surviving, the 1947 penny isn’t considered rare. So, the value of a typical coin in good condition is $0.02. This also applies to a coin with the D mintmark.

As for ones with the S mintmark, they’re generally worth $0.03. Of course, the less worn and more bright coins are, the more value they hold!