For those new to the Pokémon world, Pokémon is a shortening of the words “Pocket Monsters,” which was the original Japanese name. The roots of the franchise can be traced back to a Japanese gaming magazine called Game Freak in the 1980s, and was started by Ken Sugimori and Satoshi Tajiri.

This was the beginning of a franchise that would take the world by storm and become the second-largest gaming franchise.

Snivy was introduced in Generation V and is a grass-type starter Pokémon. Snivy, a serpentine creature, has a mainly green body and a tan stomach. The tail of Snivy looks like a leaf, its end being as long as its head.

Snivy, unlike other snake-like creatures, has both arms and legs. With its quick movements, Snivy is able to face enemies larger and more powerful than itself. It must get plenty of sunlight, as it is its primary food source, and if unable to, its tail will wither.

Since its debut as a BW Black Star Promos card in the Pokémon Trading Card Game, Snivy has been featured on nine different cards. Snivy cards are Grass type Basic Pokémon playing and trading cards. 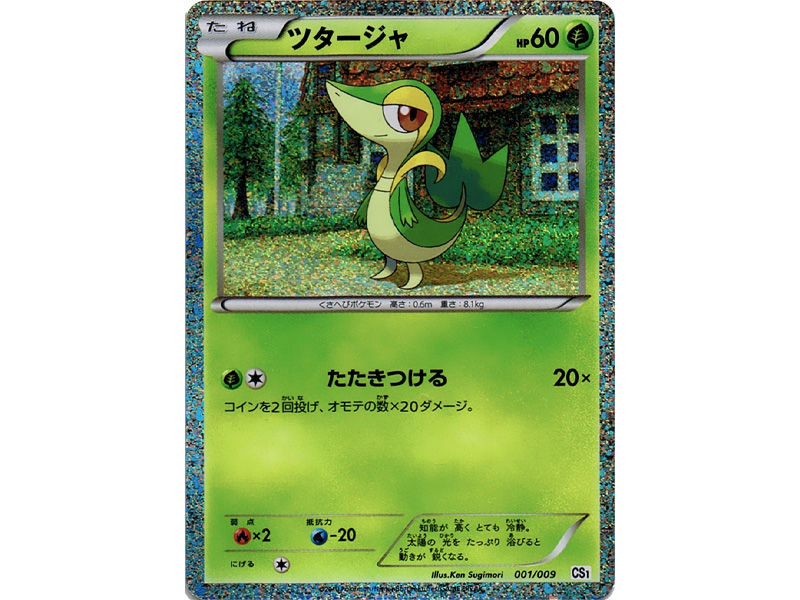 This print was part of the McDonald’s Collection, which became available in North America in June of 2011. Later, it was reprinted in Japan numerous times as BW-P Promotional cards. 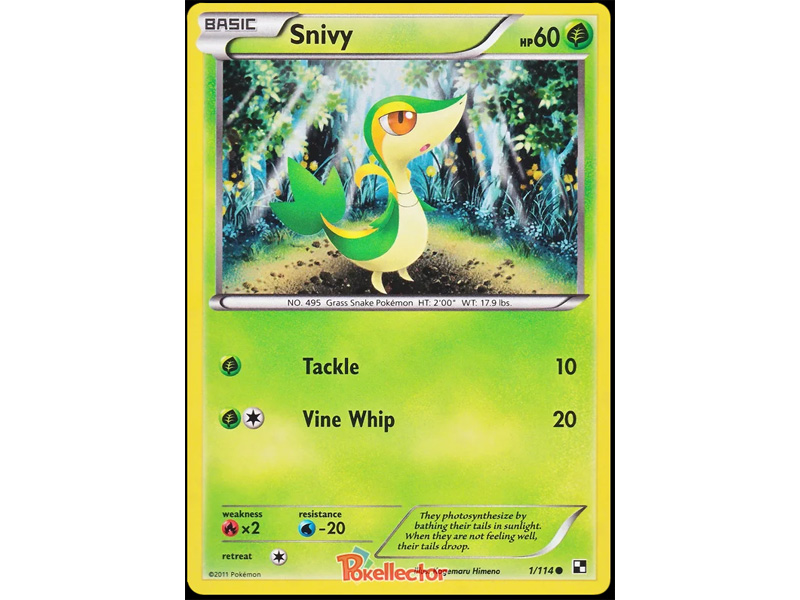 This card was released in the Black & White English expansion and initially included in the Beginning Set for Girls and Begging set in Japanese. It was also reprinted in Japan’s Beginning Set + and Beginning Set Version Pikachu. The 2011 Pokemon League cycle included a special Crosshatch Holofoil with the English print. A Cosmos Holo print was added to the Super SnivyBox in September 2011. 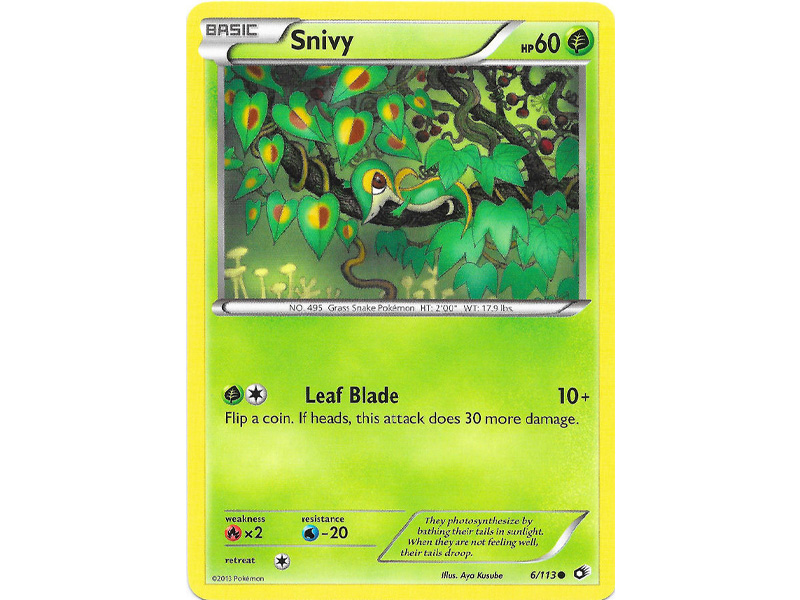 This card was first featured in the Black and White expansion and released in the Japanese White collection. It showcased 5ban Graphics artwork and was later reprinted in the Legendary Treasures expansion showcasing artwork by Aya Kusube. 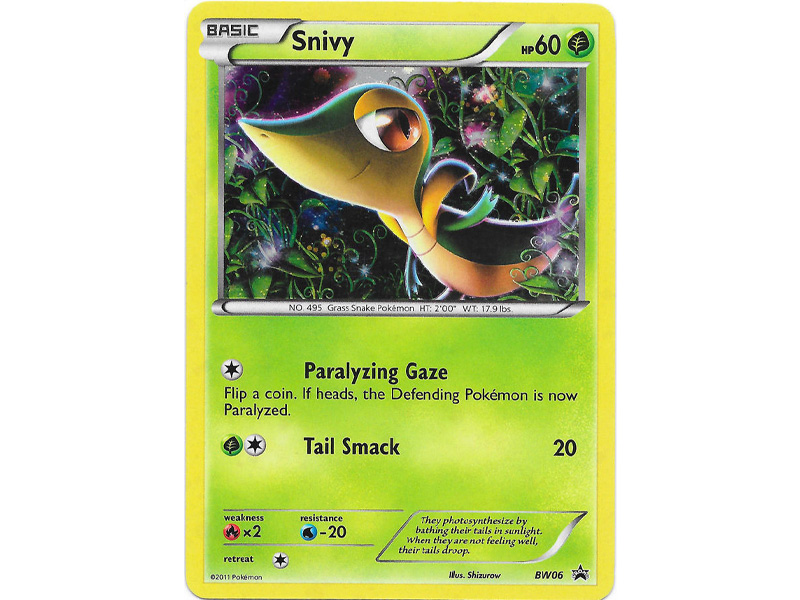 This card was one of the Holofoil Black Star Promos, and it was available in both Black & White packs. This card was issued in Japan as a promotional card for a shirt campaign by the clothing company Uniqlo, which began March 14, 2011. 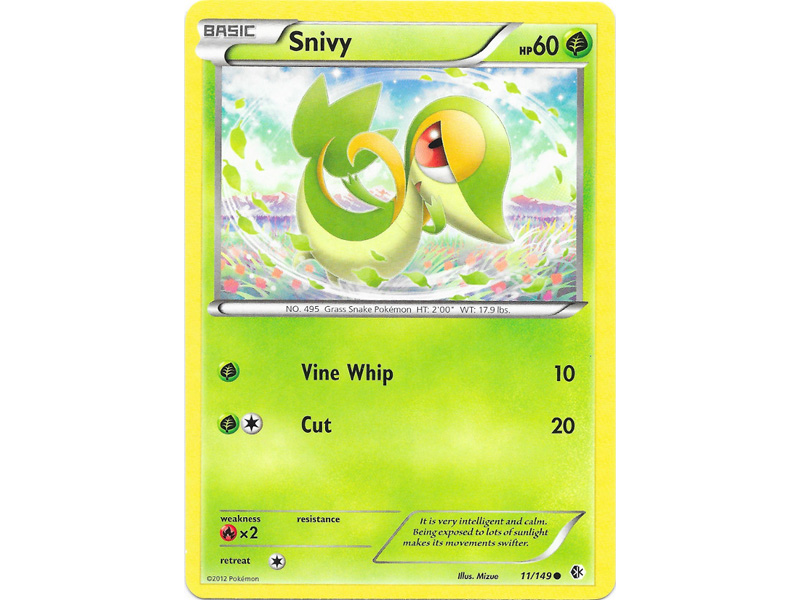 This card is a Basic Pokémon Grass-type card and is included in the Boundaries Crossed expansion. Snivy can learn the Vine Whip and Cut moves in the Pokémon games, and this card’s Pokédex entry originates for Pokémon White. 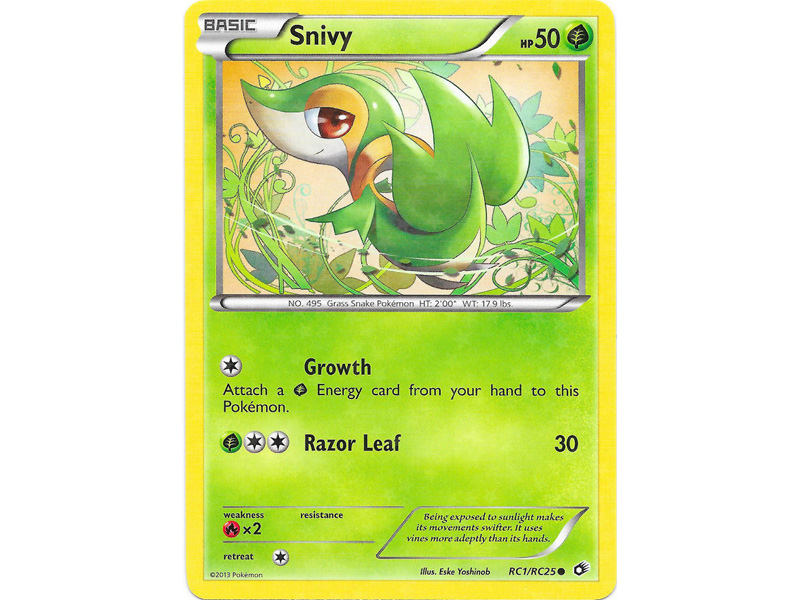 This is the third and final subset of the Pokémon Card Game BW Era. The English expansion was released on November 6, 2013, and the Japanese subset on July 13, 2013. Legendary Treasures includes its Japanese counterpart as well as the Genesect Deck Kit. It also included the Radiant Collection subset of the Japanese Shiny Collection. 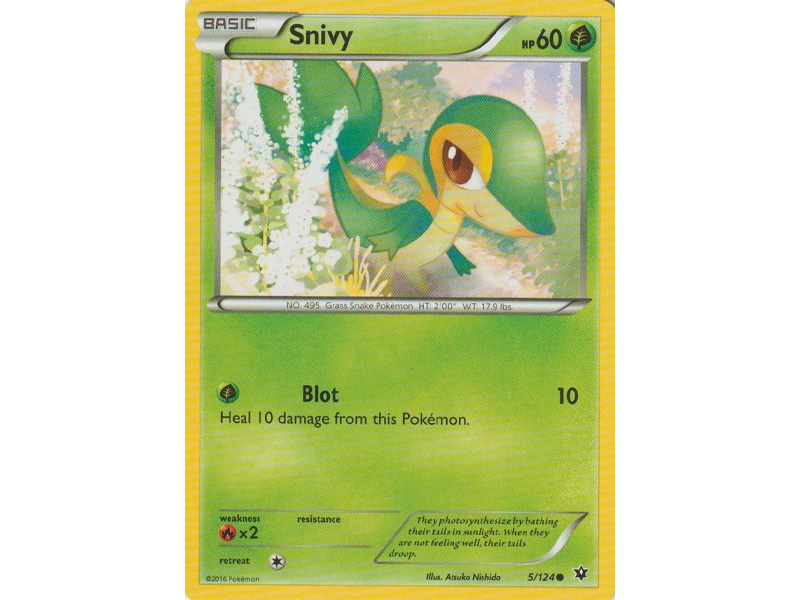 This collector’s card was released in the Fates Collide 5 expansion. Fates Collide refers to the third major expansion of the XY BREAK Series from the Pokémon Trading Card Game. It was originally released in Japan as Awakening Psychic King.

It’s based on Pokémon X and Y and features Generation VI Pokémon, Psi Pokémon Alakazam, and the Order Pokemon Zygarde with its three Formes. The English expansion was made available on May 2, 2016 and the Japanese edition was released on March 18, 2016. 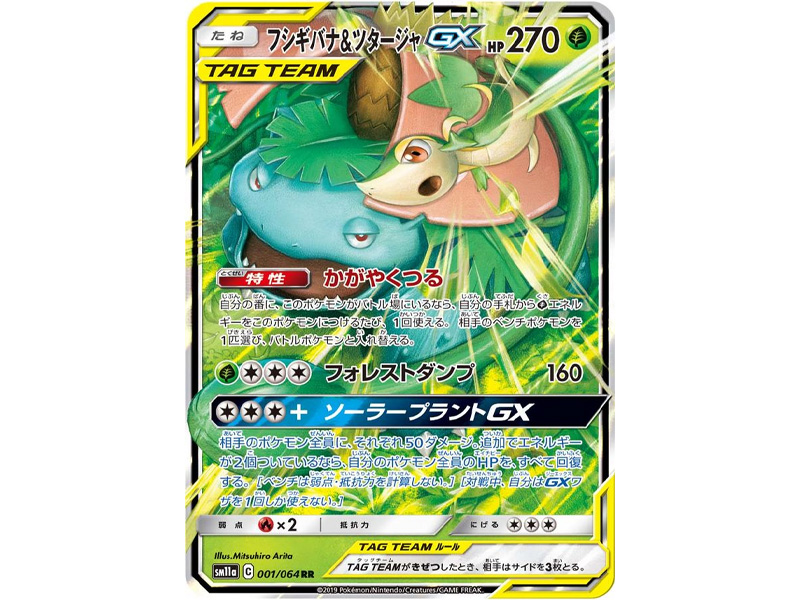 This card was also included as a regular card, a Full Art card, a special full art card, and as a Secret Rainbow Rare in the Remix Bout subset. The Regular print was designed by Mitsuhiro Arita. The Full Art and Rainbow Rare prints showcase artwork by 5ban Graphics, and the Special Full Art print is by Yuka Miori.

The Cosmic Eclipse expansion included the Regular, Full Art, and Rainbow Rare prints. The Special Full Art print was made available in the Team Generations Premium Collection as an SM Black Star Promo.