How to Store Pokemon Cards

Pokemon is a phenomenon that took the world by storm when it was first launched in Japan back in the 1990s. Most of these sorts of fads don’t last for too long, fading out after a few months, or, at most, a couple of years.

However, the Pokemon craze has endured for many years, with the second generation of children now wondering how to store Pokemon cards. In fact, it is not only children who want to know this.

Many young adults today still have their sets of Pokemon cards from their childhood, because they knew how to store Pokemon cards correctly. When stored in the correct fashion, they will last for many years and can give you endless hours of enjoyment.

How Did Pokemon Originate?

The name Pokemon is an abbreviation of Pocket Monsters, the original name they were first known by. It all started way back in the 1980s, in Japan. But Pocket Monsters themselves were not the start of the fad. They evolved over time, as a result of other events.

There was a magazine called Game Freak. It was all about gaming, as you might have guessed. It was published by two Japanese men named Satoshi Tajiri and Ken Sugimori. Confirmed gaming fans, and in fact, they were actually totally obsessed with gaming.

There is nothing better than turning your hobby, or your passion, into your living. This is what these two men decided to do when they started the Game Freak magazine. It had always been their dream to create something original in the gaming field.

Since all they could think about was gaming, they decided to channel those thoughts in a productive direction and make something that other gaming enthusiasts could enjoy at the same time. And so the magazine Game Freak was born.

Satoshi Tajiri has a wildly adventurous mind and is not only crazy about gaming. He is also a very talented writer, and he wrote all of the articles for Game Freak when it first started. Today he remains CEO of that company.

Ken Sugimori has more of an artistic, creative streak. He loves drawing and had spent most of his life with a pencil in his hand, sketching anything that came into his mind. So it was a foregone conclusion that he would do all of the illustrations for the magazine. Today he is a high-ranking member of the board of the hugely successful Pokemon Company.

Now holding a very high position in an enormous company, Ken Sugimori is still in charge of all of the illustrating work. He is the Artistic Director, and still oversees all illustrations himself. He still has most of the responsibility for the Pokemon artwork.

Tajiri and Sugimori came up with the idea for the Pocket Monsters game when they became bored with all the other existing games that were being played in-game arcades. They presented it to Nintendo, the biggest gaming company in the world. Initially, they were not too keen on the idea.

However, it didn’t take them too long to realize that they could be onto something big, and they soon started seeing the potential in this new game. They started developing various versions of Pokemon, and it quickly gained popularity.

Within a couple of years, Pokemon had become one of the most popular video games owned by Nintendo. It was launched on their hand-held gaming devices, and within a very short period, these devices became the top item on the birthday list of millions of children and teenagers.

In the early 1990s, the hand-held gaming device was one of the top-selling gift items at Christmas time. Soon kids all over the world, and not only in Japan, were playing Pokemon at every available moment.

Given the history of the fact that the Pokemon video game was such a runaway success, it stands to reason that the creators of this popular activity would have wanted to do more with it. Why stop at video games, when there was a world of opportunity for them to take it further?

And so, in the mid-1990s, Pokemon cards were launched. The world’s favorite video game now had a little brother, in the form of a card game. And the potential for its growth and development was immeasurable.

Within a few months of the launch, school play yards were filled with young kids sitting in circles and playing Pokemon card games during recess. Trading and swapping cards became the favorite activity, with some cards considered to be much more valuable than others. Pokemon cards are small cards made of high-quality cardboard. The type of cardboard used in the manufacturing of these cards was a very important consideration. Because of the nature of the game, which involved a lot of handling of the cards, they needed to be made of strong and durable material.

Soft, thin cardboard would bend and tear easily. The corners needed to be very strong, so that they would not fold or split. If you come across Pokemon cards that are made of thin, soft cardboard, they are very possibly counterfeit cards.

All standard Pokemon cards are uniform in size, and measure exactly 6.3 x 8.8 cm, or 2.48 x 3.46 inches. Any variations on this size are likely to be an indication of a counterfeit card. Sadly, there are many fake Pokemon cards that have been produced illegally and are unauthorized copies of the original Pokemon cards.

There is one variation, however, that is fully legitimate, and that is the Jumbo card. These are cards that are significantly bigger than the standard Pokemon cards, and there is no single, uniform size. Most Jumbo cards are anything between 5 and 7 inches long. The biggest Jumbo card is about 8 inches in length.

The cards depict all of the same characters that had become so well-loved in the video game. They are bright and colorful, which makes them appealing. In order for them to be even more eye-catching, lots of the cards have metallic features and have a bright, shiny surface.

Most cards have a lot of information printed on them. This tells you all about that particular character, and how to incorporate it into the game. It also informs you about the origins of the character.

Some Pokemon cards are fairly common, while others are rarer, harder to come by, and are therefore more valuable. Each card has a little shape symbol on it, indicating its rarity. The rarity symbol is usually black and will be either a circle, a star, or a square.

A small black circle on a Pokemon card indicates that it is a common card. There will be many duplicates of this card in circulation.

The most coveted Pokemon cards are those that display a black star. These are the rarest cards, and a card like this will have very few duplicates. These are the cards that have the highest value in the game. They are also the most valuable cards for a serious collector.

How To Store Pokemon Cards You will obviously love looking at your cards frequently. I am sure that you will also want to show your collection to your friends and family who are also keen Pokemon fans.

One of the biggest problems with Pokemon cards is that they can easily get damaged and become very worn from frequent handling, especially around the edges.

The best way to protect your cards from this sort of damage is to store them in an album or binder. There are many different types of binders and albums available for storing Pokemon cards.

The best type of album to use is one with many little pockets, each holding only one card. It is important to insert the cards very carefully so that they do not get bent.

It is also possible to get binders with bigger sleeves so that you can fit a few cards into each sleeve. These are not ideal, and I do not recommend them, as your cards are more likely to get damaged.

If you enjoy playing games with your cards and are always taking them out and then putting them away, it is a good idea to store them in a special tin. If you have an album, and you regularly take the cards out and then put them back in the pockets of the album, they may become bent and worn.

If you store your Pokemon cards in a tin, it will be easier to get them in and out without damaging the cards. There are special Pokemon card tins that have been made specifically for this purpose.

These tins are just the right size for storing Pokemon cards, without the cards moving around too much in the tin. Any movement causes friction between a particular card and the cards directly above and beneath it.

This friction, or cards rubbing against each other, eventually damages the surface of the cards and should be avoided. The best way to prevent this movement is to store the cards in a tin that holds them snugly.

An added bonus of storing your Pokemon cards in a special tin is that it is possible to get tins that have pictures of some of the well-loved Pokemon characters on their lids. It can be fun to collect the tins as well as the cards.

If you have a very large collection of Pokemon cards, you may have quite a few tins to house your collection. You can then sort your cards into various sets, and store them in separate tins.

Another popular way to store Pokemon cards is in a hard case that is double-sided and closed with a zipper that goes all the way around it. These cases are also available with pictures of different Pokemon characters on the outside of the case, and they come in a variety of colors.

This makes it a practical way of storing your Pokemon cards. You can have different colored cases for the different types of cards so that you do not confuse them.

In families where a few siblings all collect Pokemon cards, it is useful for each child to have his own colored case. In this way no one’s cards will get mixed up, avoiding those all-too-common sibling fights.

Like the tins, they are made to the perfect size for Pokemon cards, and most of these cases have a piece of mesh inside, creating a pocket that holds the cards so that they do not fall out as you open the zipper. Most of these cases can hold up to 50 cards.

When deciding how to store Pokemon cards, these tips might be helpful:

All Pokemon cards are published in sets, and every card has a unique number.

The natural oils in your skin can damage the surface of the cards.

Humidity can be really damaging to your cards. They will get damp and may stick to each other. The corners may also curl up.

If you follow these guidelines for how to store Pokemon cards, your cards should last a very long time and give you years of pleasure. 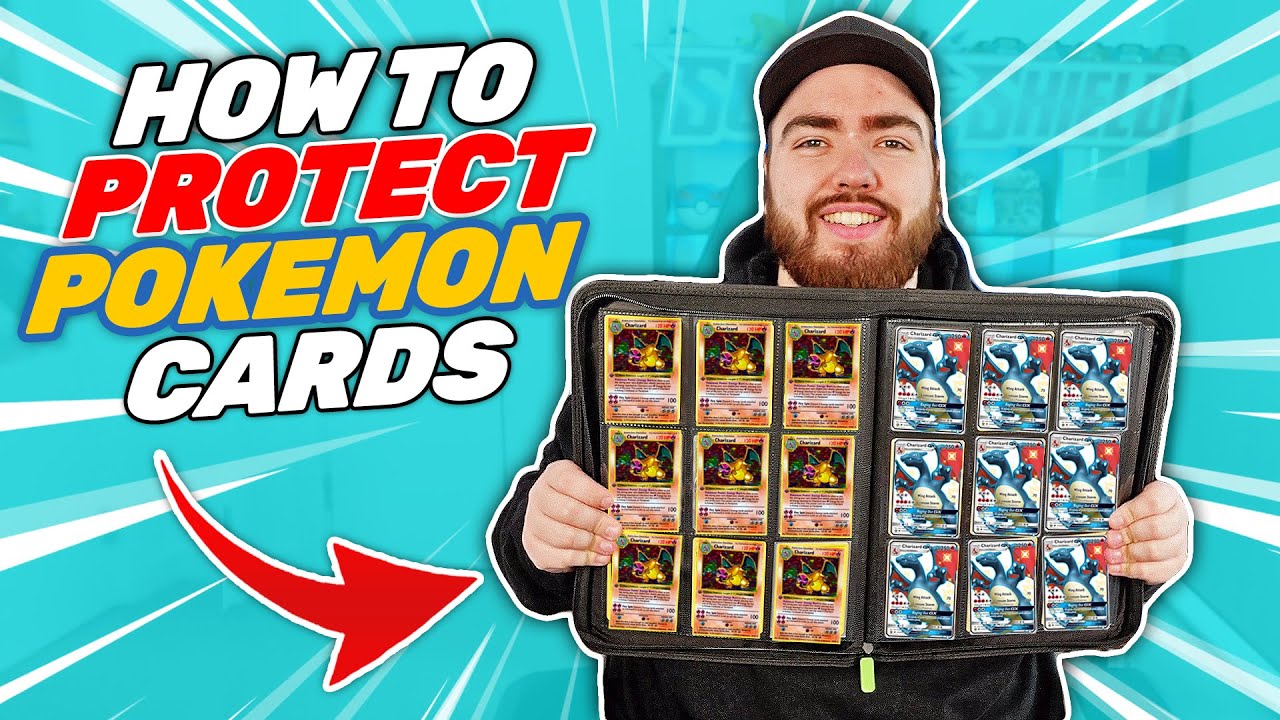