Every Pokemon player and collector knows the myth and the legend that is Mewtwo. Even more so a legend is the Mewtwo pokemon card as they can be incredibly rare.

While a regular Mewtwo card is not the most expensive Pokemon card there is, they will still cost a collector or player a pretty penny—unless they were lucky enough to pull one out of a pack.

Some cards were only sold in Japan or came with rare misprints that only ran for a week or two before they were caught, adding to their value and difficulty in finding on the market, let alone a pack.

Below are the Mewtew Pokemon cards with the highest values on the market and what makes them so valuable.

Despite the name, the PSA grades all sorts of cards and collectibles, including Pokemon. PSA’s grading system runs from a PSA 1 to a PSA 10 based on the card’s quality.

The Professional Sports Authenticators look at damage to the card’s edges, surface scratches, water damage, and any bends in the card when determining the card’s rating.

Cards rated a PSA 1 are in bad, almost unrecognizable condition and cards rated PSA 10 are in what is called “Gem Mint” condition. Gem Mint condition cards are cards that look like they are fresh out of the pack, never touched. 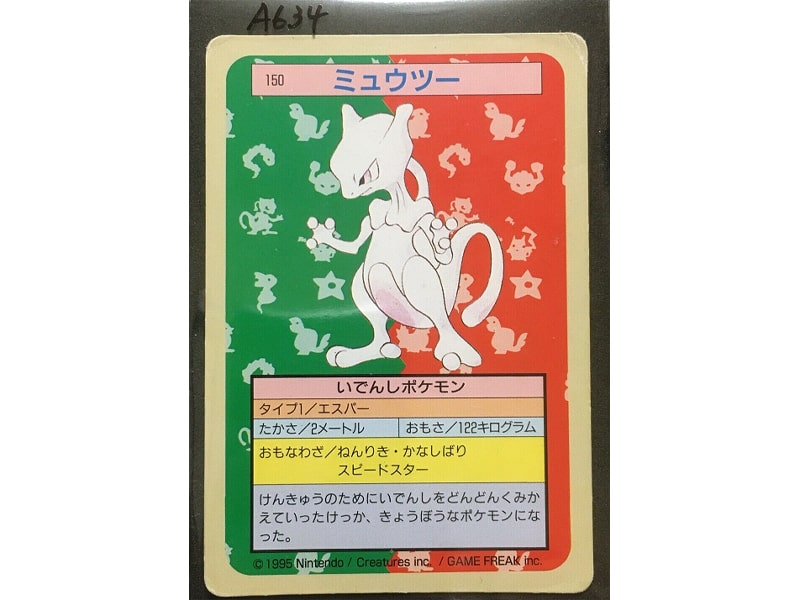 Though not technically a Pokemon card, these cards were sold in vending machines in Japan for collecting only, not for playing.

The intention certainly worked, as this card is now highly prized. The fact that they were sold only in Japan and their age makes them rarer on the American market, but it is a popular card among collectors because it is so unique and so hard to find on the market.

However, the year is off on this one, as Mewtwo was only introduced in 1996, a year later than this card says it came out, and these cards are reputed to have actually come out in 1997. 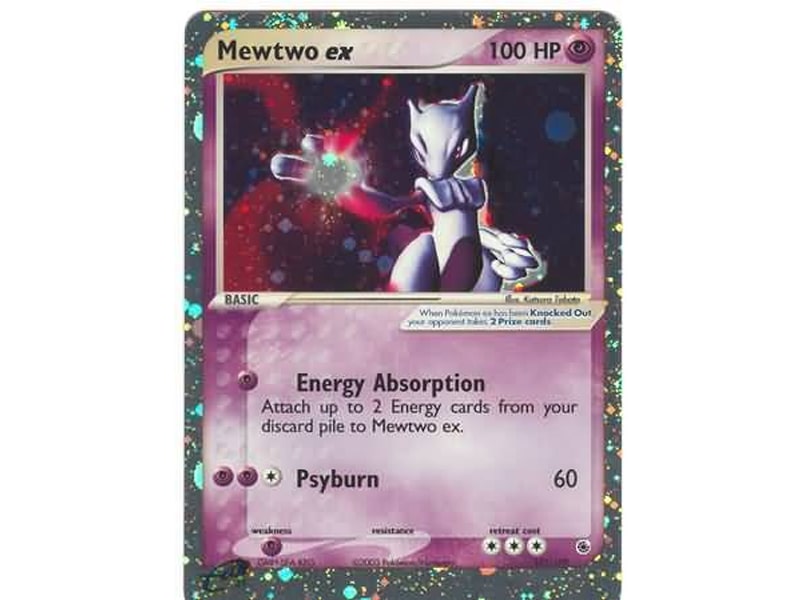 As more EX and GX cards are printed and grow in popularity with collectors, the originals become more valuable and harder to find outside of a personal collection.

As a result, the 2003 Pokemon-EX Ruby and Sapphire Mewtwo Holo, the first Mewtwo EX Pokemon card, has gone for $2,600. This price was for a Gem Mint card and lowers with lower grades and rougher handling by the original owners.

A PSA 8 of this card recently sold for $220, for example, which is an incredible price difference for just two grades below. 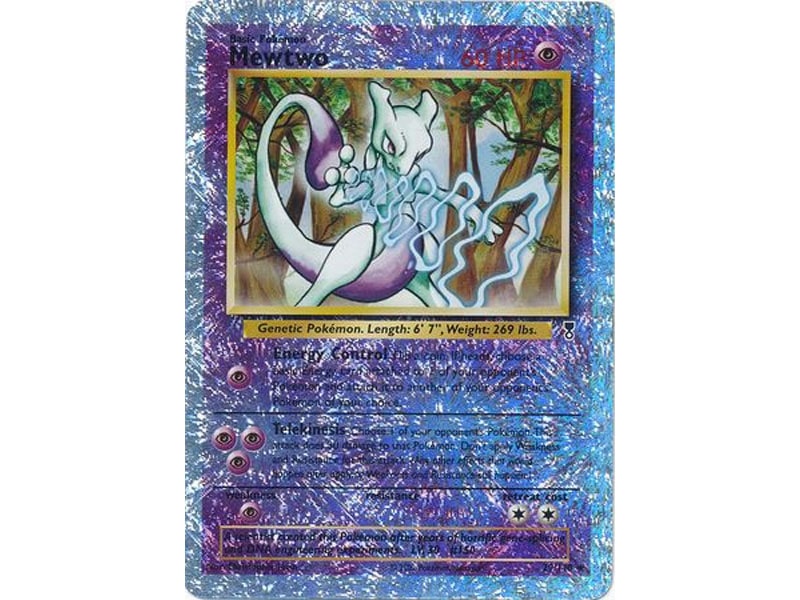 As the popularity of Pokemon card collecting has grown with the general public in recent years, the value of this card has skyrocketed due to its rarity.

Out of the 145 of these cards sent to the PSA for grading, only 36 have been in Gem Mint condition, with even fewer of them being on the market.

This set was released by Wizards of the Coast only in the United States and was one of the first reverse foil cards to be released, making them one of the harder cards to come by.

This card also features a photo variation of Mewtwo, making it attractive to collectors on top of the eyecatching foil fireworks in the background.

One of these cards has recently sold for $3,500 in Gem Mint condition, a price that has grown fourfold in the past couple of years, and another card graded a PSA 9 sold for $910. 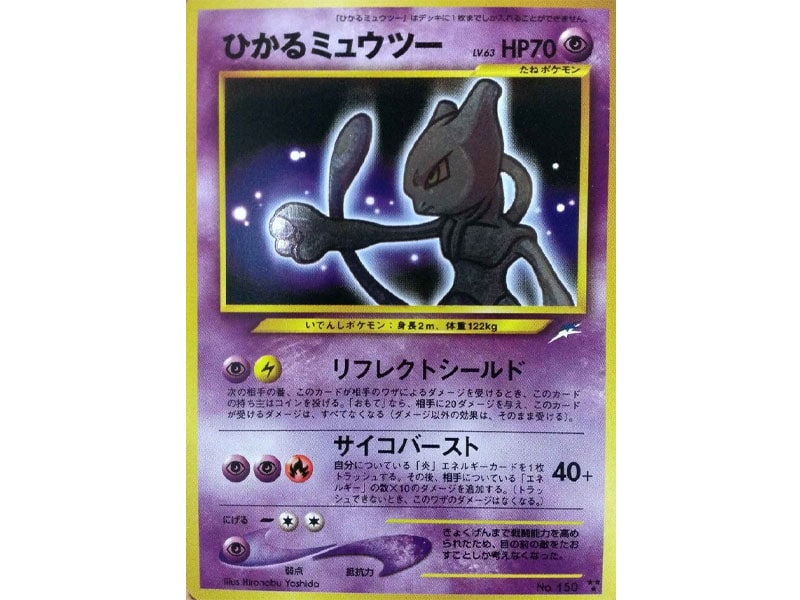 Only 40 of the 152 copies of the 2001 Japanese NEO 4 Shining Mewtwo Pokemon cards sent to the PSA for grading have been in Gem Mint condition, a number is not likely to go up.

Finding these cards perfect is difficult, doubly so because the card was printed in Japan. This card is incredibly popular with collectors, partially because of its rarity.

Collectors also enjoy how Wizards of the Coast made Mewtwo holo instead of the background of the card, a unique feature to this card.

The card’s popularity has caused the value of a 2001 Japanese NEO Shining Mewtwo card skyrocket to $5,510. Just a step below, a PSA 9 card recently sold for a fifth of the price of the Gem Mint at $1,215. 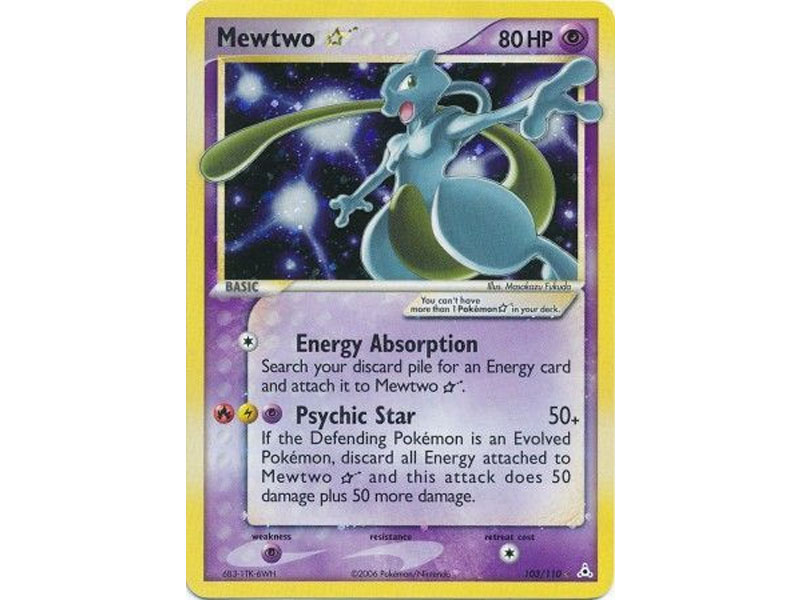 Illustrator Masakazu Fukuda illustrated the entire Gold Star set himself, creating the first Pokemon to come out of the character box as if coming to life.

Masakasu Fukuda is a favorite among collectors and his cards are highly prized among them. Holon Phantom Gold Stars were also incredibly rare when they were coming out, players and collectors could expect at most 1 Gold Star from the entire box when they bought it.

Though, with 106 Gem Mint Ex Holon Phantom Mewtwo Holo (Gold Star) that have been graded by PSA, one would think it would drive the price down.

However, the price has continued to rise, with one selling recently for $6,750. Lower grades sell for significantly less, a PSA 9 recently sold for $1,730 and a PSA 8 selling for $940. 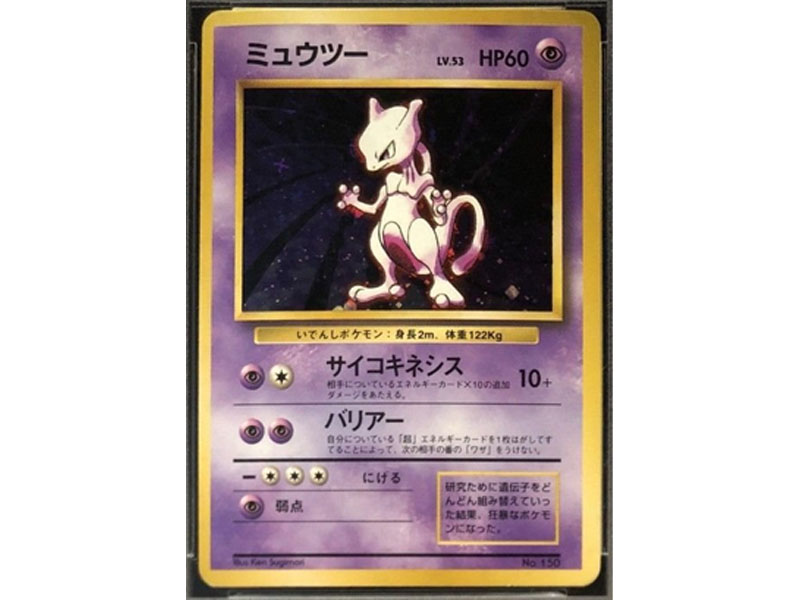 Errors on Pokemon cards are rare and Pokemon is known for being swift in correcting them, which is why the 1996 Japanese Mewtwo Pokemon Card Holo with no rarity symbol is worth so much.

This is also, technically, the first Mewtwo card ever printed. However, because of the lack of a rarity symbol, there was less care put into preserving them because players and collectors did not know they were rare cards.

This in turn made them an even more rare card, even with wear and tear and lower gradings.

Finding these cards in Gem Mint condition is incredibly difficult, increasing the value tenfold. A Gem Mint PSA 10 of this card recently went for $15,750 and only 8 of them have been reported on PSA’s website. 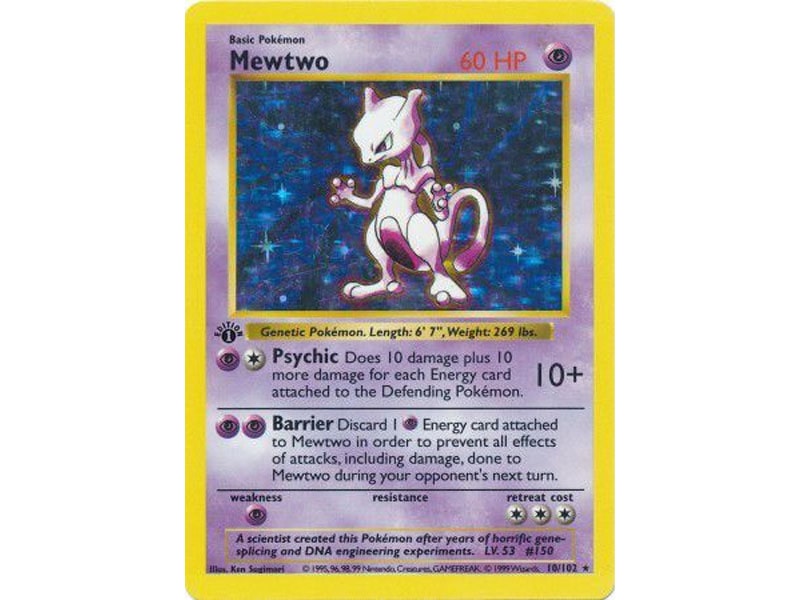 1999 is the year the first official Mewtwo card came out, despite Mewtwo appearing three years before in 1996 in the Pokemon Red and Blue game.

As the 1999 First Edition Mewtwo Pokemon card grows older, the rarer it becomes as cards are lost or damaged and the more its value continues to increase to collectors and players.

At a glance, a seasoned Pokemon card collector can tell this is the first edition from 1999, the shadowless box, and the 1st edition stamp give it away.