Pokémon is a game that keeps reinventing itself. Starting in October 1996 out of Japan, the first series of Pokémon card games was launched. It took some time for the English cards to launch in America in December 1998 but ever since the craze has spread across the globe from card games, to cartoon series, merchandise, movies, and culminating most recently in the Pokémon GO mobile game.

As with most original items the Pokémon cards have since become valuable beyond just their place in the game. They are now sought after by collectors who look for the most original, rare, and best condition cards to add to their collection. The two main factors that go into determining the value of a Pokémon card are its rarity and condition.

With Pokémon cards the way rarity is determined is by a small black shape in the bottom right-hand corner. A circle is common, a diamond is uncommon and a star is rare. The shapes are usually black, if a star is gold or white this is extra rare. As with most things a first edition card is also worth more.

Holographic cards are also more valuable. There are a number of other considerations in determining a value and it can be overwhelming to a newbie.

If you think that you have a valuable card the best way to get an accurate indication of its value is to get it professionally assessed. The most popular third-party grading service is PSA (Professional Sports Authenticator) other services include BGS (Beckett Grading Services) and SCG (Sports Card Guarantee).

They usually provide a grading from 1-10, with 10 being almost perfect and worth the most. If a card is in near perfect condition it is called gem mint and this increases its value. After a card has been graded it will be placed in a protective plastic casing with the grade labeled on it.

We will be looking at the 1995 Meowth Pokémon card to see what it is worth and how it could possibly add to your collection or if you have the card how much it could be worth. Meowth the character is a feline-type Pokémon that loves to roam around at night. It loves round and shiny objects. It has been a character in the Pokémon series since generation 1 and evolves into Persian in the game. 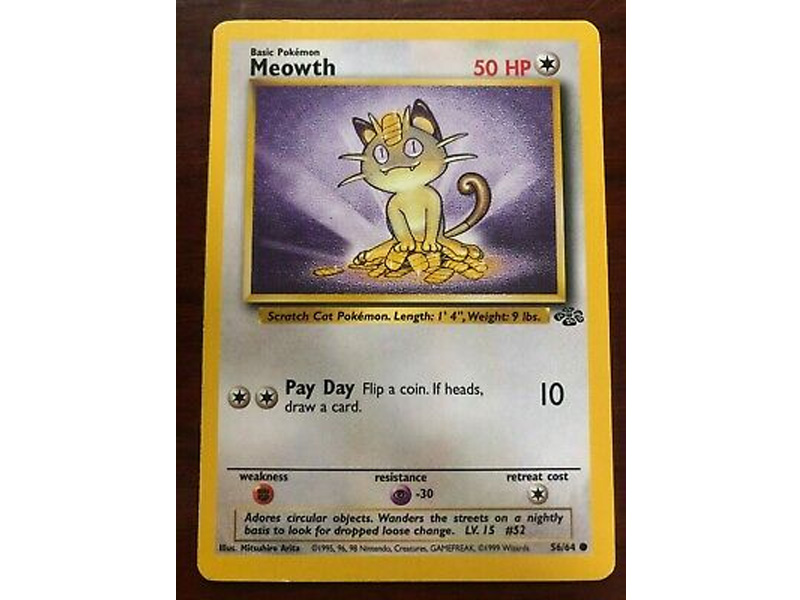 There are plenty of statistics and history on Meowth and its capabilities in Pokémon but when it comes to the value of the card these items are not of as much importance. The rare Pokémons tend to fetch a higher price but Meowth is more of a common Pokémon so the value is not as high.

A first step in looking at what your Meowth card might be worth it to look online at sites like eBay, collectors.com, and pokemonprices.com to gauge what previous cards have sold for. Often the statistics are presented with graphs and links including pictures so you can see how your card measures up.

Previously on pricecharting.com the 1995 Meowth card sold anywhere between 0.01cents and $67. The card that sold for $67 was a Meowth 1st edition jungle gem mint 10 PSA Pokémon.

This is a near-perfect card with a grading of 10 and it is the first edition so it explains the higher value. It is important to note most sites will only pull data from certain sources usually their own in terms of sites like eBay so you may find different values on other sites.

The 1995 Meowth card is part of the jungle pack released in June 1999. There were a total of 64 cards released in this pack and Meowth is 56/64 and this is what you can see appearing in the bottom right-hand corner.

Certain packs that have been released over the years include booster packs and limited editions and these cards can often be more valuable due to their rarity. There are other Meowth cards released in other packs, for example, there are different types of Meowth, Galarian Meowth, and Alolan Meowth all part of different generations.

According to one37pm.com Meowth had the most exposure after Pikachu on TV and is one of the sneaky valuable Pokémon cards to get your hands on.

Since fall 2019 the value of a PSA 10 1st edition Meowth card has increased from $20 to now averaging $50. There has even been a card sold at a top value of $102.50. This is definitely a positive trend if you either own the Meowth card or you are looking to increase the value of your collection by buying one.

Currently, there are only 370 graded PSA 1st editions so this gives you an idea of the value and availability of one of these cards.

Something to keep in mind when buying cards especially online is to be certain of what you are purchasing and to also be mindful of the intended transport as this could risk damaging a card that you have paid good money for. If you are purchasing a PSA 10 1995 Meowth card you would have some peace of mind knowing if it has been graded it will be in a protective casing.

There are a number of considerations when it comes to getting your Pokemon cards valued and we have only touched on some of the aspects here. The most important ones with Pokémon cards are how common the card is, the size and type of collection it is a part of if it is holographic, and if it is the first edition.

The condition of your card is the next highest factor in its worth. One of the sneaky valuable cards is the 1995 Meowth 1st edition jungle gem mint 10 PSA Pokémon card. Be sure to add it to your collection as soon as possible if you do not have it already and remember you got to catch them all!