Best Model Train Brands For 2023 – Our Reviews and Comparisons

Model trains have been a popular hobby for many years. From little boys to old men, and even a few girls and ladies, people have collected and played with model trains for centuries.

Some of the best model train brands have been around since this hobby first became popular. There are so many different brands and types of model trains to choose from, that it is almost impossible to identify ‘the best’.

When trying to choose the best model train brands, it all depends on who you are, and for whom you are choosing. There are so many variables in this hobby.

The little boy who loves trains will be perfectly happy with an inexpensive, simple little train that has an engine, one or two coaches, and a track.

An older boy, or a young adult, might want something a lot more sophisticated, while an elderly man who has been collecting model trains for years and years would probably only want a train that has all the ‘bells and whistles,’ something that will top his previous best train.

All of these activities can keep the model train enthusiast occupied for hours on end. It is a hobby that is wonderful for people who enjoy their own company and like spending time alone, just playing with and organizing their trains.

Model train collecting is considered by some people to be an ‘old man’s hobby.’ This hobby was very popular many years ago when trains were most people’s regular mode of transport.

Now that so many people seldom, if ever, actually travel on trains, they may have lost some of their appeals. Of course, new hi-tech hobbies like video games and other more modern activities have also taken the place of model trains among younger people to a certain extent.

Many people are afraid to start a hobby that involves buying model trains because it is known to be an expensive hobby. The trains themselves are not the only items that cost a lot of money. The accessories, like tracks, batteries, remote controls, and other equipment can all add up to a tidy sum.

But this does not mean that you cannot enjoy a model train hobby. It is possible to have fun with model trains, while still keeping it simple. The range of trains that are available today is so vast that there is something for everyone.

Model trains have evolved tremendously over the years. Nowadays, with the advancement of technology, many trains have digital controls. There are also many other types of remote controls that are available, making ‘driving’ your train a lot of fun.

Years ago, keeping a steady supply of batteries for your model train was sometimes difficult and quite costly. All this has changed with the advent of the rechargeable battery. These battery packs may be a little expensive, to begin with, but they are a good investment for the serious model train enthusiast. Being able to recharge the batteries of your model train saves you the expense and the bother of constantly needing to buy new batteries.

The model trains themselves also now often incorporate modern technology in their engines and tracks. This has helped to make the hobby a lot more relevant and appealing to younger people, who are driven by technology. For some, the more flashing lights, and the more buttons to press, the better.

One only needs to look around a well-stocked toy shop, or search ‘model trains’ on the internet, to see that buying, playing with, and keeping model trains is still a very popular pastime that is enjoyed by young and old alike.

Let’s take a look at some of the best model train brands that are currently available on Amazon.

This lovely train set is perfect for under the Christmas tree. With its brightly colored cars, Christmas music, and smoking engine, it creates the ideal holiday atmosphere. This set makes the perfect gift, not only at Christmas time but throughout the year as well.

What We Like About The Prextex Christmas Train Set- Around The Christmas Tree with Real Smoke, Music & Lights

This is a highly affordable train set. For a small investment, you can have a traditional atmosphere with a train chugging around under your tree.

The train sounds are very realistic. A big plus is the fact that the sound can be disabled when you get tired of the music.

Although the full oval set-up is very big, some pieces of track can be removed to make a smaller circle to suit your space.

What We Don’t Like About The Prextex Christmas Train Set- Around The Christmas Tree with Real Smoke, Music & Lights

The pieces of this train set are not very strong. Even though it is supposed to be suitable for ages 3 and up, it is made of light plastic and will not withstand the rough handling of a small child.

While it is lovely that it plays Christmas music, it only plays two songs. It becomes very repetitive after a while.

This Walthers Trainline HO Scale Model train set comes fully assembled and ready to use. The heavy die-cast metal frame makes it extra strong and gives it more power to pull coaches along the track. It can easily pull about 20 -25 cars. The train is suitable for ages 14 years and up. 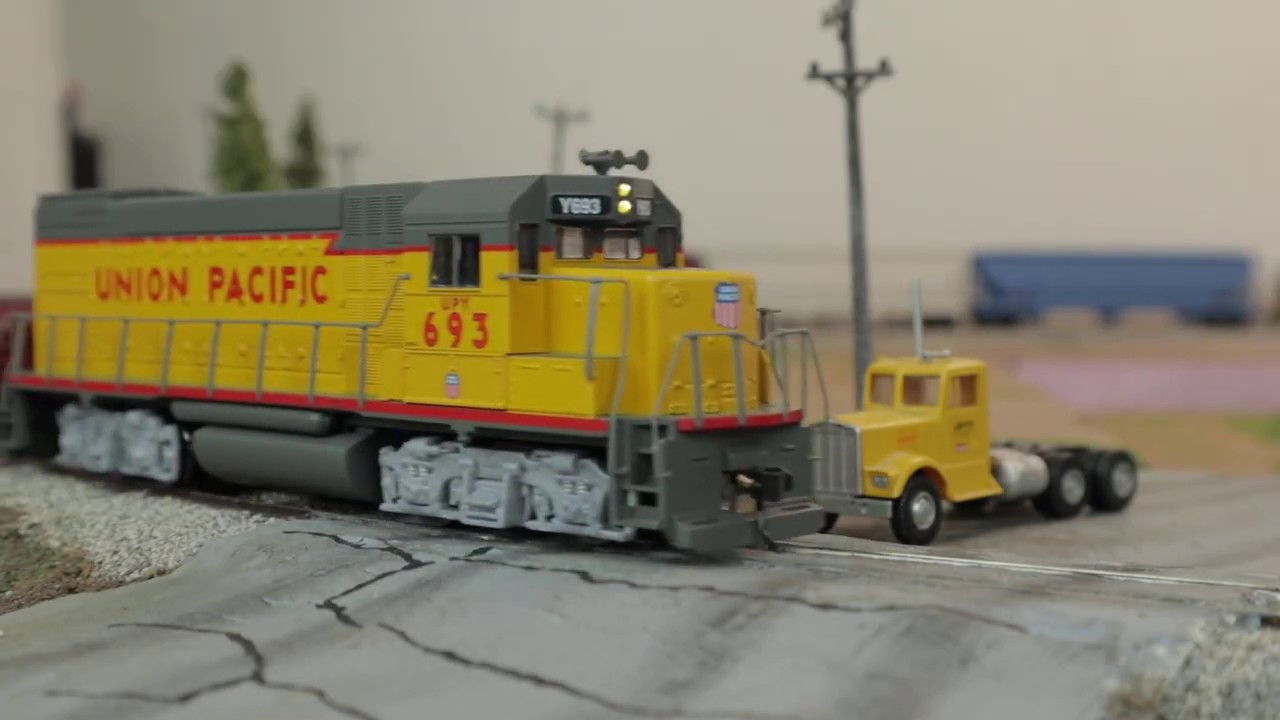 We like the fact that this train does not make a lot of noise. It operates very quietly and runs very smoothly.

It is helpful that this train is compatible with a few other well-known brands, and can be run on some other tracks.

The engine can also be coupled with cars of certain other popular brands. The engine is very powerful and is capable of both pulling and pushing a heavy load.

We don’t like the fact that this train does not come with the track. The pieces for the track have to be bought separately. If you don’t realize this at the time of purchase, you will be very disappointed when it arrives.

The product information says that this train is suitable for ages 14 and up. It is a pity that it is not suitable for younger children.

The Lionel Polar Express Ready-to-Play set comes with a fully integrated track system. It will keep you occupied for hours as you build a variety of configurations with the track, such as a circle, rectangle, or oval-shaped track.

This set is suitable for children as well as older model train enthusiasts. It makes a wonderful Christmas gift for anyone who loves model trains. 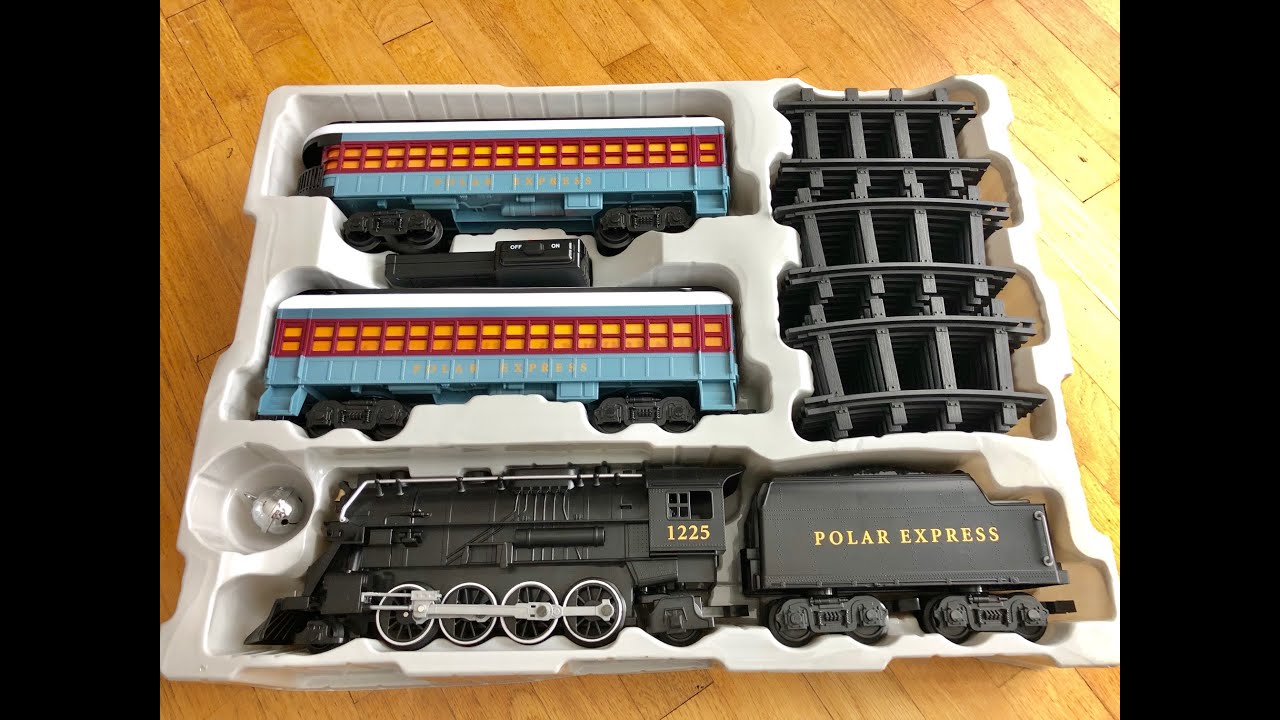 What We Like About The Lionel The Polar Express Ready-to-Play Set, Battery-Powered Berkshire-Style Model Train Set with Remote

This train set is very well made and is of excellent quality. It will last for many years. We like the fact that the remote is very easy to use, and can be mastered by a young child.

The Santa bell is a lovely little extra, making this train set the perfect addition to put under your Christmas tree.

What We Don’t Like About The Lionel The Polar Express Ready-to-Play Set, Battery-Powered Berkshire-Style Model Train Set with Remote

The battery tray is quite awkward. We struggled to remove it, and this might be a problem when you need to replace the batteries.

The remote does not always hold its connection to the train. It disconnects often, causing the train to stop.

The Santa Fe Flyer Ready To Run Electric Train Set has a very distinctive-looking appearance. It has a “war bonnet” paint scheme and includes a diesel locomotive with a working headlight. The set includes an open Quad Hopper Car, Gondola Car, and Off-Set Cupola Caboose. 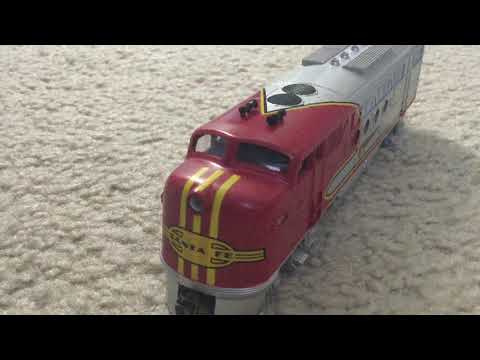 We like the variety of the coaches in this set. In addition to the impressive engine, it has a few other interesting open and closed coaches. We love the unusual paintwork and attractive appearance.

The electric power supply makes it more economical to run than battery-operated trains. The fully illustrated instruction manual is easy to follow.

Some buyers have reported that the engine of this train set does not run smoothly. It often seems to get stuck at one particular point on the track. The couplers, also, are not very good and the coaches seem to come apart often as the train goes around the track.

The train is generally very sensitive to the slightest movement or obstruction on the track.

If you are looking for the best model train brands, the Pretext Christmas train set is definitely a winner. It is a decent size, with a large track. This cute train set is an affordable way to create the magic of Christmas with a train running around a track under your tree while playing songs like Jingle Bells and We Wish You A Merry Christmas.