Who is Andre Dawson?

Andre Dawson, an outfielder, was a star on the baseball field during his stellar 21-year career in the big leagues from 1976-1996. His achievements earned him a place in the Baseball Hall of Fame. 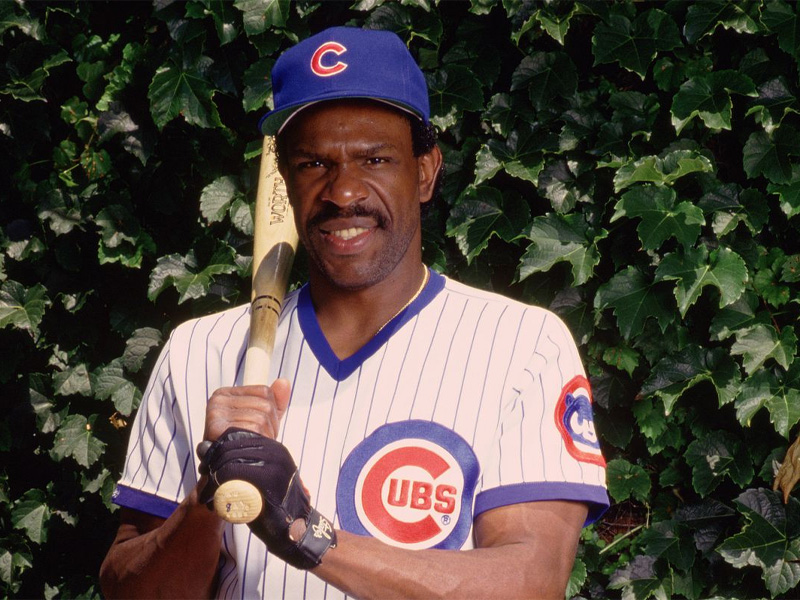 After his retirement from baseball, he pivoted his career to a funeral home director. His unique professional experience is the inspiration for the television show, Closure – a scripted one-hour drama loosely based on his life.

Also known as ‘The Hawk,’ he was an outstanding athlete who played in the outfield for four teams, primarily the Montreal Expos and Chicago Cubs. The right-handed player batted a combined .279 career average and ended his time on the field with 438 home runs, 1,395 RBIs, and 314 stolen bases. 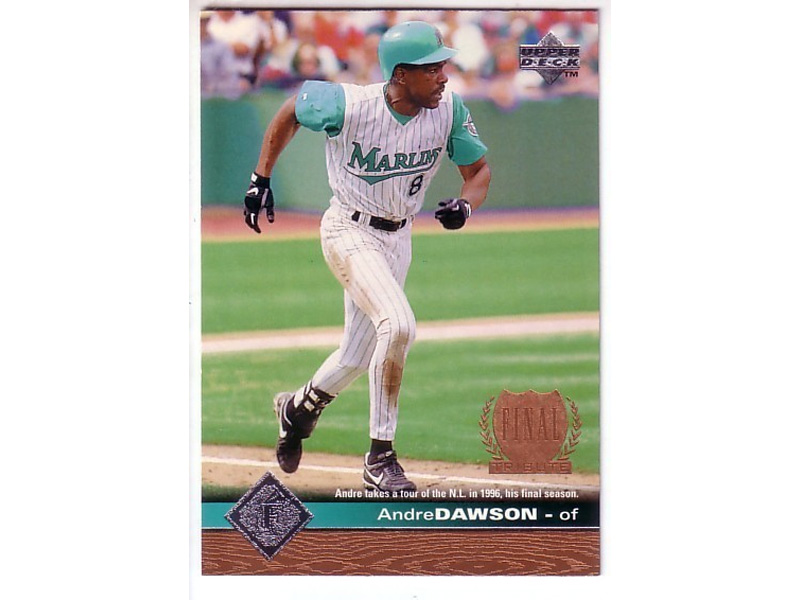 Although Dawson only played with the Florida Marlins for two seasons, remarkably few card companies captured him wearing the team jersey. This tribute card in the Upper Deck set included this tribute card showcasing Dawson playing in his final season in Miami.

The back of the card details a year-by-year statistical outline of his time playing for the big leagues. This card sells for between $1-$2. 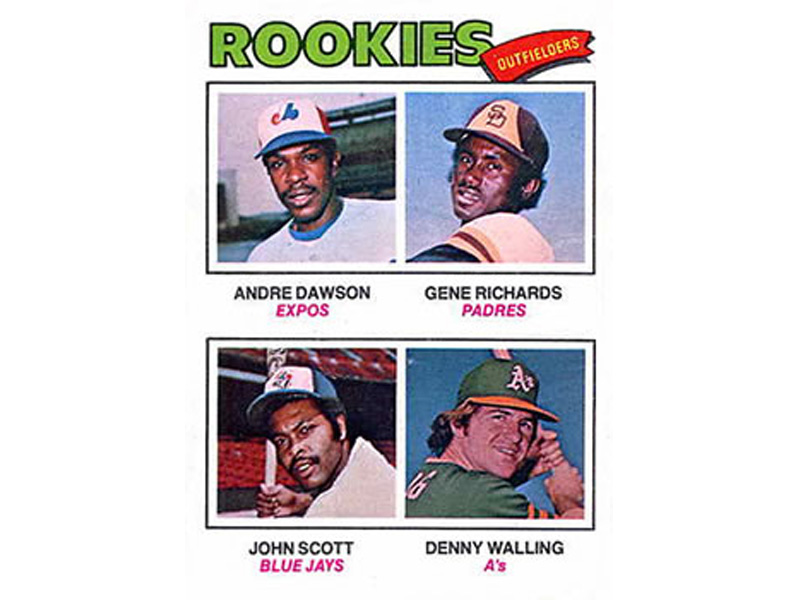 Andre Dawson’s 1977 Topps card is one of the most memorable rookie issues of the 70s. Three other players share the rookie card with “The Hawk” – two of them being Denny Walling and Gene Richards, who both also had successful MLB careers.

It is relatively easy for collectors to find both raw and graded copies of this card, making it one of the most affordable Hall of Fame rookie cards. This rookie card can sell for anywhere between $15 and $150. 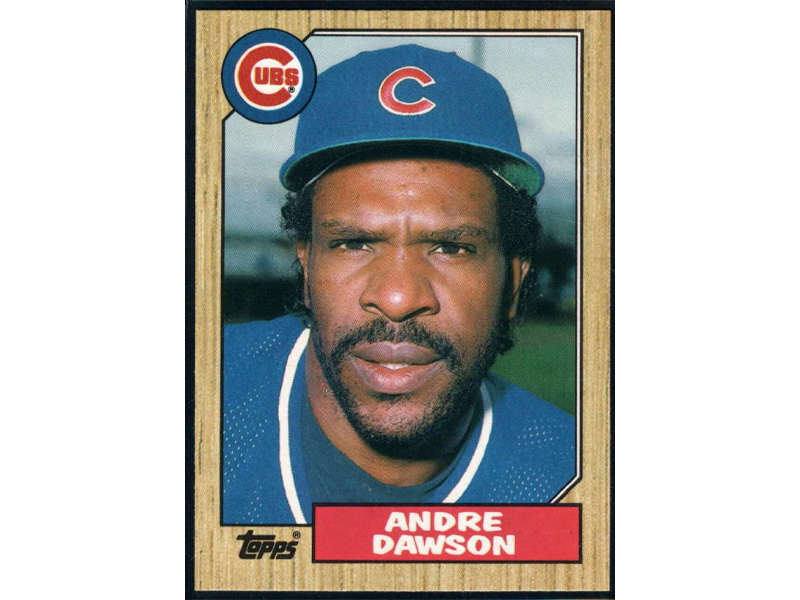 The scheming of the MLB title-holders led to Dawson being without a team at the start of the 1987 season. It’s written that he approached Dallas Green, the general manager of the Chicago Cubs, with a blank, but signed contract. He eventually joined up with the North Siders for a $500,000 paycheck.

The 1987 Topps Traded set included his first Topps card as a Cubs player, and he went down in MLB history as the first player to win MVP honors. This card sells for around $1.

1999 Sports Illustrated Greats of the Game 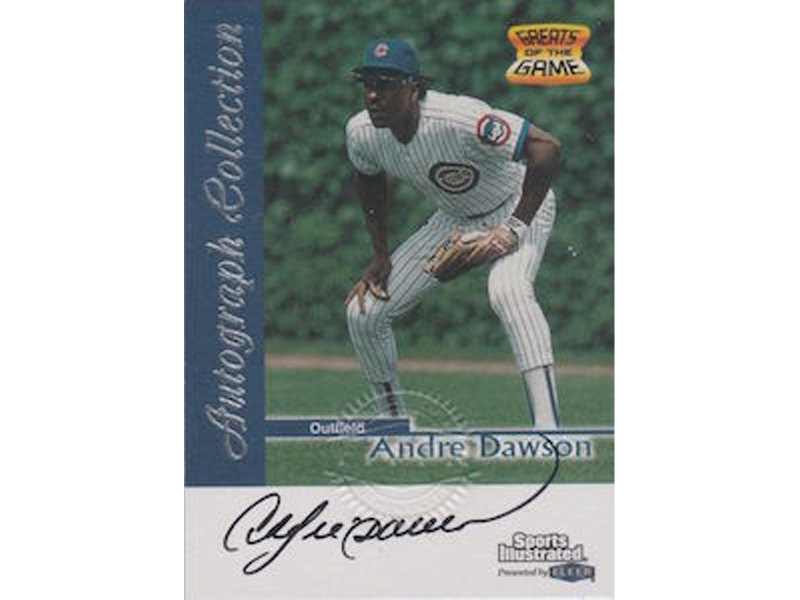 Even after his retirement, Andre Dawson remained a very popular subject for card companies. His love for his fans is evident in the abundance of signed products and memorabilia cards available. His 1999 Greats of the Game autograph was one of his first certified autographs after retirement.

This card features a Sports Illustrated photograph with Dawson’s sought-after signature at the bottom. You’ll be able to buy this card for around $45. 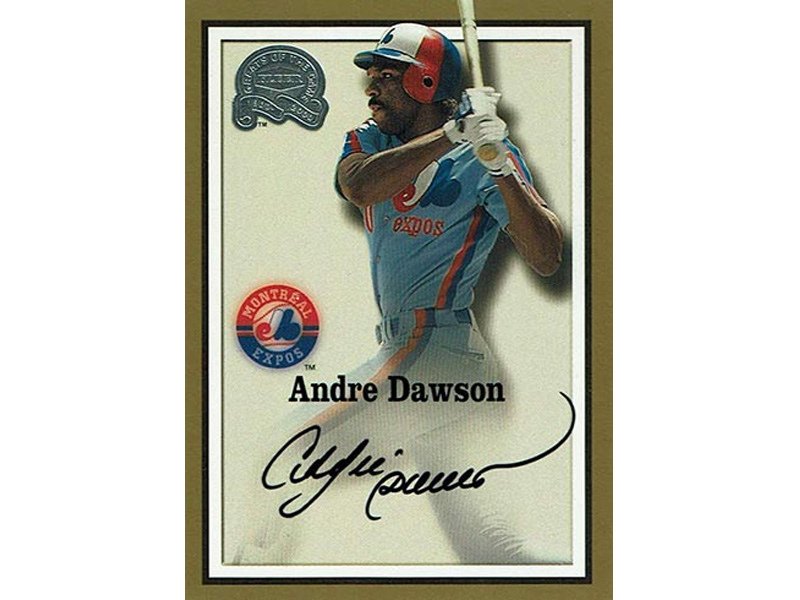 One autographed card has already been added to the list, but it is fitting that we also include one of Andre Dawson as a member of the Expos. He did spend 11 of his 22 career seasons in Montreal, after all, and is pictured on his Hall of Fame plaque as a member of Expos.

This card features Andre Dawson’s autograph, comes with an authentications certificate by the Fleer Company, and sells for around $35. 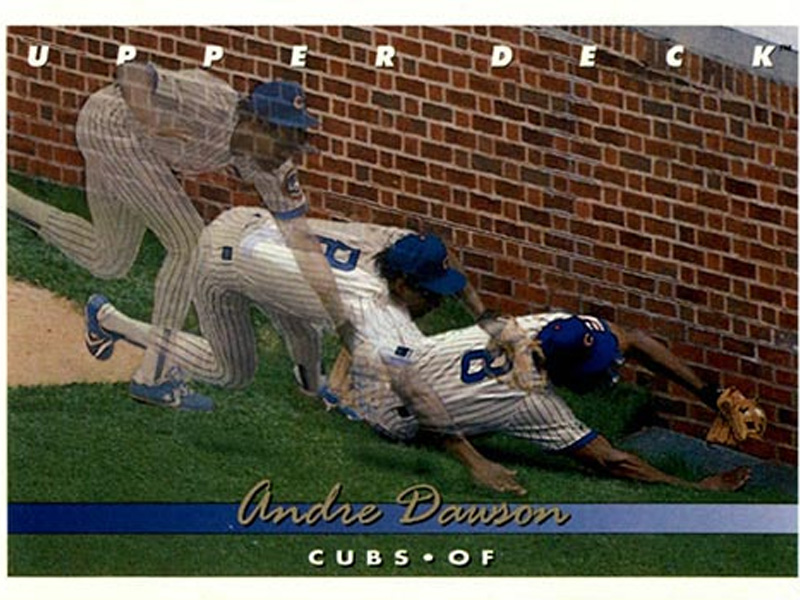 Andre Dawson is shown on this card with the Cubs, but he actually played the 1993 season for the Red Sox. Even though he has a card with Boston in their second series of the 1993 Upper Deck set, his final Cubs card is a valuable collector’s item.

In true 90s triple exposure photo style, which was first used by Upper Deck on the Nolan Ryan card in its set of 1989, this card is an excellent example of Dawson’s defensive skills where he grabs a fly ball close to the bullpen at the right-field foul line.

The photo also captures the unique brick walls that make Wrigley Field such a special place for baseball fans. This card sells for between $1-$3. 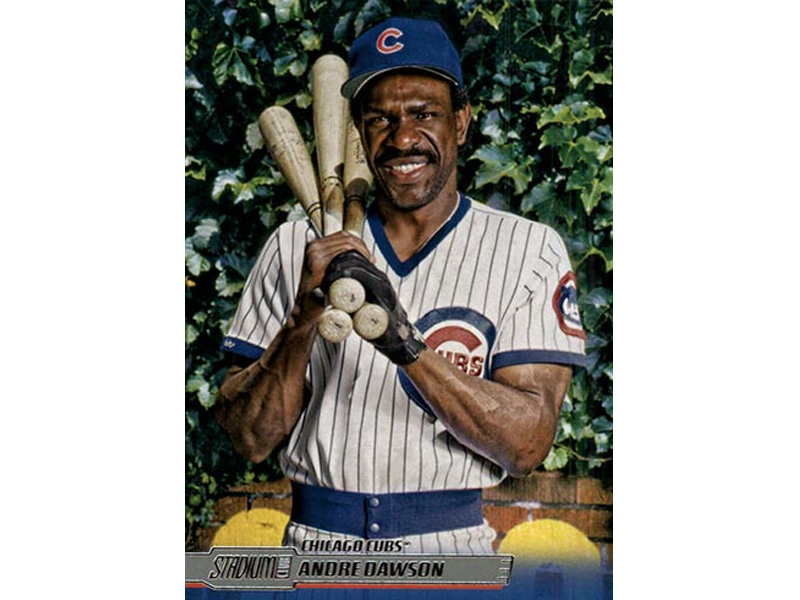 It’s the perfect addition to any Dawson card collection with the iconic 1980s jersey. This card sells for around $1. 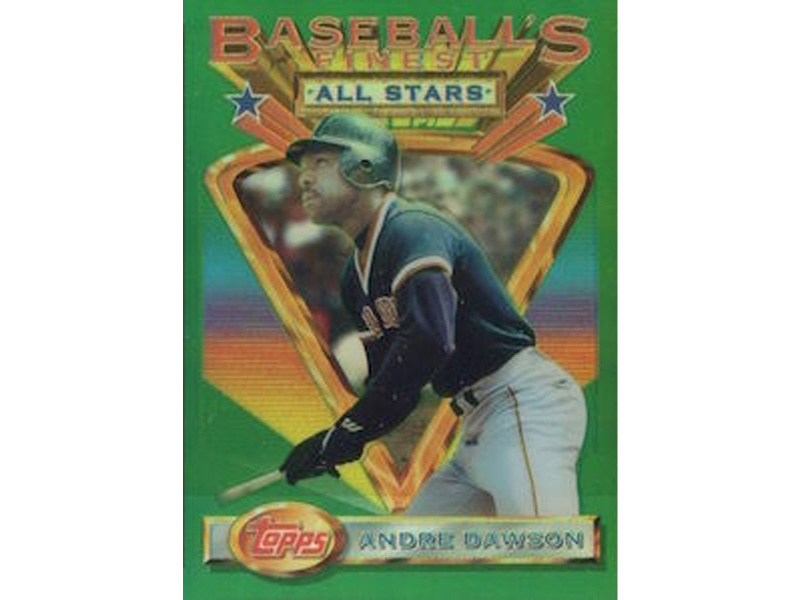 Dawson’s retirement was reflected in some of the new, tech-based baseball card sets that appeared in the 1990s. Although his 1993 Topps Finest card depicts him as a Red Sox player, and these were not considered to be his best playing days in his career, it is still a popular choice among collectors.

This card is one of few premium Andre Dawson cards that were made during his playing career. Topps included signed copies of the Dawson refractor in their 20th anniversary Finest set from 2013 as a buyback card. Depending on its condition, this card can sell for around $1,500.

After his retirement, Dawson shifted his focus to becoming a funeral home entrepreneur. He started his venture in 2003 with his brother. Andre enjoyed his new career move and has been the owner of Paradise Memorial Funeral Home in Miami since 2003.

The former ballplayer is both humble and involved. You might find him driving a hearse or mopping floors – he’ll jump in wherever he’s needed.