Head’s up for the battle between Garrett’s top two VLF all-terrain models. What’s the difference and why does the newer AT Max cost more? The main difference is that the AT Max has wireless tech, but the good news is that you can’t go wrong with either of these top-of-the-range models. 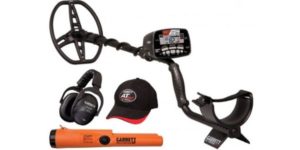 Both search out small targets on their higher frequencies. The Pro’s 15 kHz is more likely to find small stuff and the Max’s 13.6kHz will penetrate that bit deeper.

There’s not much in it.

What you’ll be looking at most is the identification scale. This is Garrett’s numeric target ID and it’ll tell you what you’ve found before digging.

The display is scored on a 0 – 99 scale and the number that flashes up when you hit a target shows what metal it’s made from – silver, bronze, or iron for example. On the vertical side is a display indicating the depth it’s buried.

The difference here is that the AT Max has a bright LED backlight and a larger display. This makes a huge difference in bright sunlight or at sunset.

The AT Max has an extra automatic ground balance window which smooths out audio and lets you hear those really faint targets, so it’s a touch better on highly mineralized ground.

Both machines have digital target ID, automatic pinpoint, and lots of modes.

The Pro has three standard and three pro search modes whereas the Max has four modes which are all pro audio – all-metal, custom, coins, and zero discrimination modes.

The Max’s true all-metal mode is included for sensitivity and depth. Its increased tech has reviewers reporting finds on ground they’ve already covered with the AT Pro.

Both are submersible up to ten feet making them perfect for deep, shallow, and water’s edge detecting. Both will work in salt water conditions too.

Here’s the big difference between the AT Pro and the AT Max.

The Max has built-in Z-Lynk wireless audio technology which means no more being tethered to your machine.

This technology is six times faster than old Bluetooth technology and enables the machine to signal when it’s over the target, not a few steps on. This is great as you don’t have to backtrack.

The Pro has Garrett’s MS-2 headphones whereas the AT Max has upgraded MS-3 wireless headphones. Neither headphones are waterproof though, so don’t go swimming in them.

Both metal detectors adjust from 40” to 53” and break down into three parts for easy storage and travel. They also weigh the same at 3.03lbs.

The Pro and the Max are Garrett’s top-performing VLF metal detectors. The Garrett AT Pro has been around for years and it’s a real favorite with serious detectorists.

The differences are that the newer AT Max has wireless technology and upgraded circuitry so it’s faster. You also get an extra search mode, backlit display, and a ground balance window feature.

If you like the idea of wireless headphones and top-quality audio then save up and get the Garrett AT Max. It’s surprising what freeing yourself from headphones can do for the whole detecting experience.