If you’re debating Garrett’s AT Pro against their AT Gold you’ll already know that they’re both VLF machines and the AT Gold is more suitable for finding gold nuggets. But what else should you know before you part with your cash? Here are all the details. 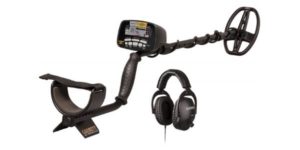 Both machines will pick up all metals but the AT Gold is better suited to smaller objects such as gold and low conductivity targets like bullets. Higher frequency machines are more sensitive to ground mineralization too.

The AT Pro runs a lower frequency so it’ll penetrate the ground further and find deeper treasure. It’s more likely to pick up silver than the AT Gold. The AT Pro will run better on wet sand as the frequency is lower.

Garrett displays are second to none and both the AT Pro and the AT Gold have clear displays with target ID, battery levels, sensitivity, depth indicators, iron audio and pinpoint.

Differences are that the AT Pro has notch discrimination and the AT Gold has threshold function.

There’s no backlighting on either machine.

These great machines have both manual and automatic ground balancing.

The difference is that the AT Pro does not have the AT Gold’s ‘ground balance window’ that makes it easier to search on varying mineralized grounds – that’s where the gold is usually located.

Digital Target ID is provided on both the AT Pro and the AT Gold running between 0-99.

Both the AT Pro and the AT Gold have iron discrimination and audio buttons to filter out trash items.

Both machines are submersible up to ten feet making them perfect for deep, shallow and water’s edge detecting.

The AT Pro will work well in salt water conditions whereas the AT Gold’s higher frequency will go haywire near salt. Something to keep in mind if you’re a beach hunter.

Both machines have Pro Audio mode and the audio is excellent. The AT Gold doesn’t have standard binary though.

Both machines have the capacity to take Garrett’s large range of extra coils, but they are sold with different coils as standard.

The AT Pro’s coil quickly covers ground at a greater depth whereas the Gold’s coil is meant to search for smaller objects like tiny gold nuggets.

Both machines measure the same starting at 43 inches and stretching up to 56 inches. Both come apart into three sections to make transporting them easier.

The AT Pro costs less and it’s more of an all-rounder on its lower frequency. It has good ground penetration and is the best choice if you’re looking to hunt for all types of targets in lots of places including the beach.

The AT Gold with its higher frequency is much better at finding gold, but it is pricier and hates saltwater.

The machines are comparable in build quality so it really comes down to the type of targets you want to find more of.