If you’re looking to choose between the Garrett ACE 400 and the AT Pro you’re in the right place. The AT Pro is a leap up from the beginner ACE series, but is it worth the extra cash? 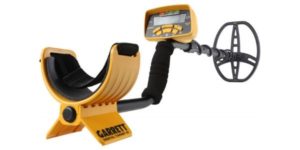 Higher frequencies have shorter wavelengths and are better for finding small things like tiny gold nuggets – so the Pro will pick up more but it won’t penetrate as deeply as the ACE 400’s lower frequency.

What you’ll be looking at most is the identification scale. This is Garrett’s numeric target ID and it’ll tell you what you’ve found before digging.

The display is scored on a 0 – 99 scale and the number that flashes up when you hit a target shows what metal it’s made from. On the vertical side is a display indicating the depth it’s buried. Both models have this feature.

The 400 has pre-set ground balance whereas the AT Pro has adjustable ground balance which is better on mixed mineralized soils and helps balance out the higher frequency. This is one of the major differences between the machines.

The ACE 400 has five search modes whereas the AT Pro has six – three standard and three Pro modes.

Both have iron audio, automatic pinpoint, and eight sensitivity adjustments.

Both the AT Pro and the ACE 400 have iron audio.

The ACE 400 has a waterproof coil only whereas the AT Pro is submersible up to ten feet. This is the second major difference.

The AT Pro can be used in saltwater and wet sand as its ground balance can deal with the mineralized conditions.

Both detectors have three audio tone ID levels to help you figure out what metal you’ve found without looking at the display.

Both come with good headphones. The AT Pro has better headphones though – MK-2s which enhance weaker signals plus they’re more comfortable over your ears.

The ACE 400 and the AT Pro have excellent search coils which are almost the same size.

Both metal detectors adjust from 40” to 53” and break down into three parts for easy storage and travel.

These are two excellent machines for metal detecting and you will enjoy using either.

The AT Pro is a step up and it costs more because it’s entirely waterproof so you can use it in rivers, streams and the ocean. It also has an extra search mode, enhanced audio, and adjustable ground balance.

Overall, I’d say the Garrett AT Pro takes the step into serious detector territory – if you’re looking to level up it’s a great buy. If, however, you don’t want to go near water or highly mineralized ground save your cash with the Garrett ACE 400.