In this review we’ll look at the Garrett Sea Hunter Mark II metal detector.
We’ve compared value for money, features, ease of use and underwater detecting ability
to give you our top recommendations. 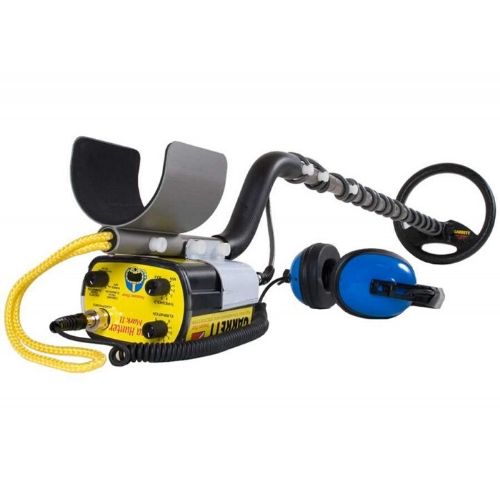 This is a top-rated piece of kit for serious water treasure hunters and was a favorite of expert treasure diver Sir Robert Marx – if that’s not a glowing endorsement I don’t know what is.

I’d recommend this metal detector for experienced detectorists who want to search beneath the surface of the ocean, lakes, rivers, and other water sources.

This is a pulse induction detector so it’ll take saltwater in its stride and you can use it on the beach to search wet sand too. In my opinion, a VLF machine is a better option for dry sand.

So – calling everyone that wants to scuba or deep dive wrecks – this is your machine.  It’s a beauty that’s reliable in the water. When you’re diving or dealing with waves an unreliable detector is not only annoying it’s dangerous as it takes your eye off the ball.

Let’s look a bit closer at the Sea Hunter Mark 2.

Features and Benefits of the Garrett Sea Hunter Mark II

Metal detecting in water is more difficult than on the land, even if you’re only in the surf. You always need a free hand to steady yourself and the Sea Hunter has a one-handed operation control box with easy twist knobs. Love it.

There are two knobs that control audio threshold and discrimination. The depth and sensitivity adjustment are fixed.

This pulse induction machine has automatic salt elimination so that saves plenty of time getting ready for sea adventures.

The Sea Hunter Mark II works on 7.2 kHz and has 22 frequencies on pulse induction tech, so it’s perfect for saltwater hunts where it’ll encounter all metal targets.

The Sea Hunter has an all-metal deep seeking mode and two discrimination modes which are both ‘motion modes’.

This means you can choose your own personal level of trash elimination. Trash elimination is an issue for PI machines, with lots of water-favoring detectorists finding they have to dig everything or risk missing the ‘big one’.

Garrett has developed two discrimination modes to counteract this long-standing problem. You’ve got ‘standard trash discrimination’ and ‘discrete trash elimination’ to choose from.

‘Discrete’ will eliminate more in terms of thin flat targets such as foil or ring pulls for example but it’ll still pull up gold rings or coins in a really trashy area.

One of the control dial knobs I mentioned earlier varies this discrimination strength from 1 to 9 which is handy as it means you can fiddle a bit if you’re still pulling out trash.

The Sea Hunter Mark II is entirely waterproof. No water is getting into that control box!

You can dive to depths of 200 feet (that’s 65 meters). That kind of depth will take you to wrecks no problem.

Audio on the Sea Hunter Mark II is one tone on a 0 – 10 threshold that’s controlled by the second dial.

It’s adjustable so you can set it to suit. Reviewers say that although it’s one tone, you pretty swiftly understand that softer tones mean great targets and loud harsh ones are the waste-of-time-bottle caps. It’s worth digging for those deeper, fainter tones.

The standard pack includes submersible headphones – but here’s a tip. Double-check they are waterproof.

Some customers have said they’ve been given standard headphones instead. It’s possibly a mass packing mistake so just check it out before jumping in.

There’s no ground balancing on the Sea Hunter Mark II because it’s immune to saltwater and not suited to land hunting.

If you’re a salty dog this is your boy. Use the discrimination dial on wet sands if you’re getting overwhelming audio.

Where Is Best To Use The Garrett Sea Hunter Mark II?

The Sea Hunter is unsurprisingly best in saltwater whether it’s 200 feet deep or surface scuba diving. It also performs well in the surf and wet sand conditions.

I’d avoid land with this machine unless you’re happy to spend a lot of time adjusting the discrimination settings and still end up with nothing.

What Will The Sea Hunter Mark II Find?

The Sea Hunter will find jewelry, coins, relics, brass, lead cartridge shells, and all the junk too. Use those elimination modes and discrimination dial when needed.

It’ll find these targets in oceans, lakes, rivers, wet sand, and both freshwater and saltwater.

Reviewers say it consistently picks up targets buried 10 inches in sand and mud.

How The Sea Hunter Mark II Compares to Other Garrett Detectors

It’s difficult to compare this model to others in the Garrett range because it’s their underwater model and the others aren’t fully submersible.

Other Garret detectors aren’t fully waterproof and they aren’t suitable for diving. Garrett’s ATX is also a pulse induction machine, but the control box isn’t waterproof. I’d be wary near water because one slip and your ATX will be gone.

This is the best (and I’d say only) Garrett machine for underwater metal detecting.

It’s easy to get bogged down in specifics when you’re looking for the best metal detector, but don’t forget these basic bits of information.

The Sea Hunter Mark II weighs 5.1 pounds which is quite heavy but it has a hip-mounted configuration that’s worth its weight in gold.

Whether you’re on land or sea, placing the weight of this machine on your hip makes swinging the coil way less strenuous. It’s worth mentioning here that the Sea Hunter has neutral buoyancy so it won’t sink underwater and give you crippling arm ache.

When you’re on your feet use it’s long stem form to reach the ground.

The control box can be fixed in three different positions and the detector can be carried in the belt pouch too.

Sea Hunter Mark 2 takes 8 x AA batteries in its watertight control box and they last a long time – up to 22 hours so deep dives aren’t an issue.

There’s a shorter than usual one-year warranty on this machine. I’m assuming that’s because it’s used underwater which has its own set of tricky conditions.

What Are The Cons of Garrett Sea Hunter Mark II?

This is a solid underwater metal detector that picks up all targets and filters out the trash. It’s very popular with divers and surf detectorists and the only real con is that its best suited to the water.

If you wanted a pulse induction detector that copes with land and surf you’d be better with the Garrett ATX.

Overall the Garrett Sea Hunter Mark II is an excellent detector that performs well in saltwater uncovering plenty of targets.

The elimination modes are just what was needed in a pulse machine and it’s neutral buoyancy, shortened length, and hip slinger configs make such a difference in the ocean.

If you’re diving for treasure, take this with you.