The wheat penny is a one-cent coin that was minted and issued in the United States from 1909 to 1958. The obverse side, or side that displays the main design (also called the heads side of a coin), bears an image of US President Abraham Lincoln.

The reverse side depicts a display of two stalks of wheat, on either side of the writing, hence the name Wheat Penny. If you have any of these coins in your possession from the 1950s, you may be interested to know the 1957 wheat penny values.

The 1957 wheat penny is a very common coin. Like most other wheat pennies, it features a profile view of Abraham Lincoln. The words ‘In God We Trust’ are printed above his head. The word ‘Liberty” appears on the left-hand side, while the date appears on the right-hand side.

On the reverse side, the two stalks of wheat appear in an arc on either side of the coin, with the words ‘ONE CENT’ in the center, and ‘UNITED STATES OF AMERICA’ under that.

The motto of the United States of America, E. PLURIBUS UNUM, appears along the top of the reverse side of the wheat penny. This motto is Latin, meaning ‘Out of many, one.’

The wheat penny is made of a mixture of copper, tin, and zinc, with copper being the main substance (95%) and tin and zinc making up the other 5%.

What is The History Of The Wheat Penny?

The wheat penny was designed by Victor David Brenner. Because it has an image of Abraham Lincoln on the head’s side, it is also sometimes called the Lincoln Cent and the Lincoln Penny.

All of these names refer to the same one-cent coin. The original U.S. penny was first produced by the United States mint in 1787. It is officially called the one-cent piece by the U.S Treasury and is casually referred to as a cent.

From the 1700s until 1908, the one-cent coin that was in circulation in the US was known as the Indian Head Penny. In 1909 production of this penny was stopped, and it was replaced with the wheat penny.

Abraham Lincoln was given the honor of having his image depicted on this coin in celebration of the 100th anniversary of his birth. Minting a coin that would be released into general circulation was considered to be the best way to honor him.

In 1909 two versions of the wheat penny were released. The initials V.D.B, after the engraver Victor David Brenner, appear in the center at the bottom of the reverse side of the initial version.

The second version, minted later in 1909, dropped the V.DB. initials. However, these initials were reintroduced and appeared on the penny coin again in 1918. But in these later coins, the engraver’s initials appear on the obverse side of the coin and are not as big.

What Is The Value Of A Wheat Penny? 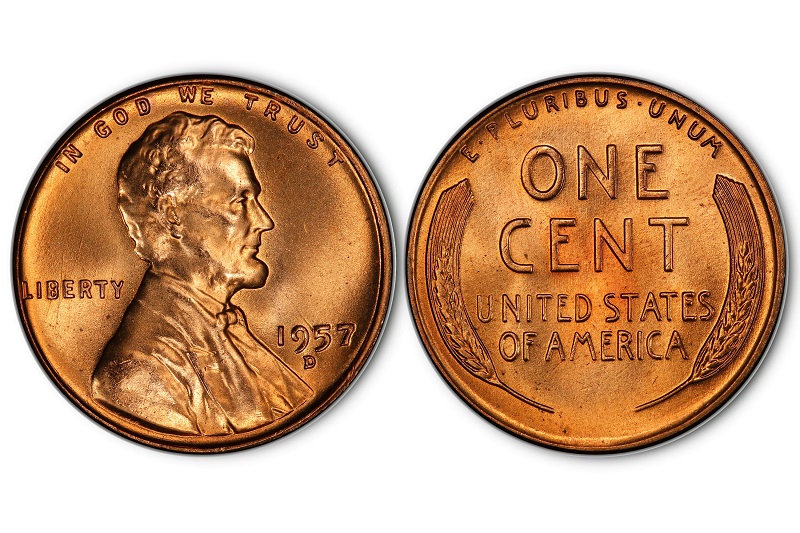 The face value of a wheat penny is one cent. However, most of these pennies are worth more than their face value. There is a very broad range of values. Some of them are worth only a few cents, while others have a much higher value.

Many people are under the misguided impression that the 1957 wheat penny value is very high. Sadly, this is not the case. More than 280 million of these coins were minted, meaning that they are now only worth a little more than their face value.

According to many knowledgeable coin collectors and dealers, the average 1957 wheat penny value is about 15 cents. However, some are worth more than that, with a select few being worth as much as $5.

All coins are graded by the Professional Coin Grading Service or PGCS. The only 1957 wheat pennies that could be worth as much as $5 are those that have been graded by the PCGS as being in certified mint state or MS+.

These are coins that have never been in circulation and are in the same condition as the day they left the mint. Because these wheat pennies are still in their original perfect, untarnished condition, they are considered to be more valuable.

There is also a limited number of proof coins that were minted. The 1957 wheat penny value of proof coins is around $8 – $10 per coin. There were approximately 1.2 million such coins minted in 1957.

Proof coins are coins that are minted at the beginning of the launch of a particular coin. The manufacturing process is slightly different, giving the coin an extra-shiny surface. It is different from an uncirculated coin. 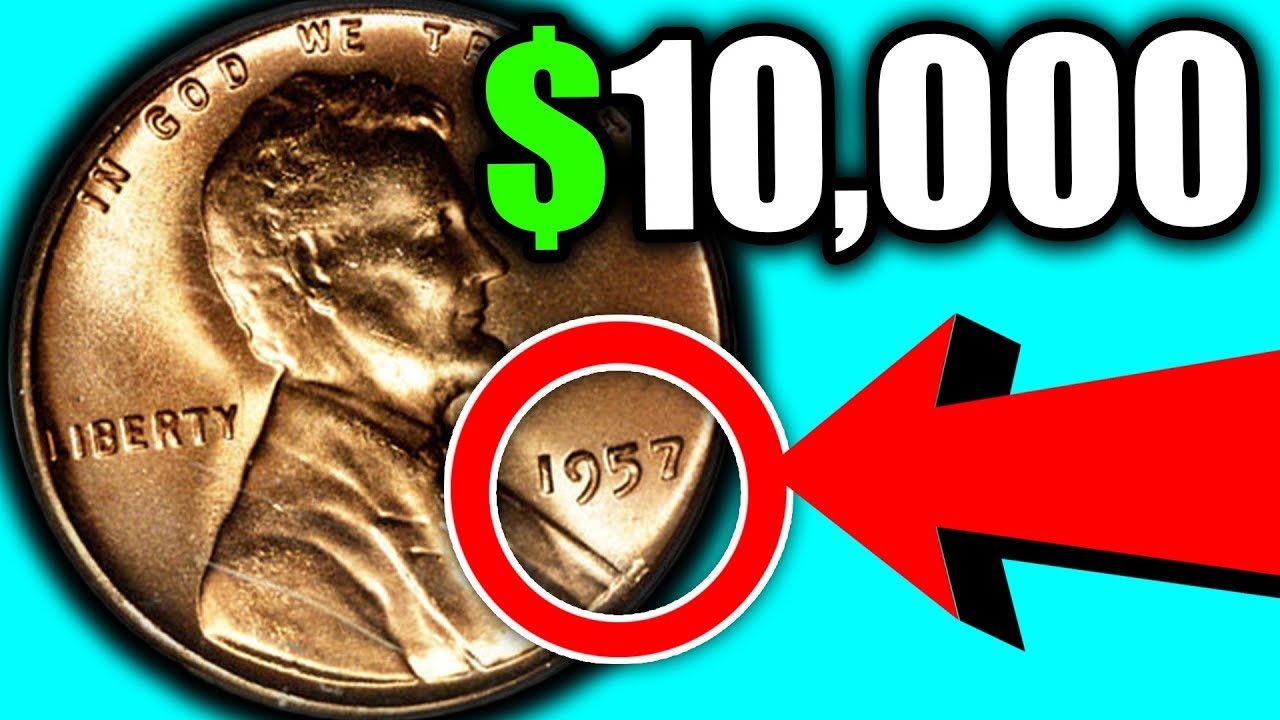 Are Any Other Wheat Pennies Valuable?

As we have seen above, while the 1957 wheat penny is not of enormous value, it is still worth more than its one-cent face value.

However, there are numerous other wheat pennies that have proved over the years to be of substantial value to serious coin collectors and dealers.

Let’s take a look at some of the other wheat pennies that are known to be more valuable.

If a penny has a ‘D’ under the date, that means that it was minted in Denver. (Pennies that do not have a ‘D’ were minted in Philadelphia).

The 1914 D wheat penny is considered to be one of the more valuable wheat pennies because very few were minted in 1914.

In average condition, one of these pennies is probably worth about $280, while a 1914 D wheat penny in certified mint condition could bring in as much as $5 500.

Wheat pennies minted in 1922 are also quite rare. As a result, one in average condition would be worth about $20, but one of these coins in certified mint condition may fetch close to $5 000.

This penny does not have a ‘D’ on it. The absence of the D indicates that the coin was minted in Philadelphia, and not Denver.

The value of the 1926 wheat penny ranges from 35 cents for one in average condition, to about $3 000 for one in certified mint condition.

If a penny has the letter ‘S’ under the date, this is an indication that it was minted in San Francisco. The wheat penny that came out of the San Francisco mint in 1925 is worth about $1.50 in average condition, and $1 800 in mint condition.

This san Francisco-minted penny has a market value today of about $28 in average condition and $1 500 in certified mint condition.

The 1923 wheat penny does not have a mintmark. It is still worth significantly more than its face value, with a value of between 75 cents and $1 000.

What Are The Most Valuable Pennies?

As with most spheres in life, even in coinage, errors can occur. Some of those pennies that were never intended for circulation landed up being released in error. Those pennies have proved to have a much higher value as a result.

In the early to mid-1940s two such pennies made their appearance.

Very few steel pennies were minted in 1944, and regarding those that were, they never intended to be released into circulation. Therefore the few that were released are extremely valuable.

A 1944 steel penny in certified mint state condition can fetch as much as $100 000 on auction. One of these in average condition could still be worth more than $70 000.

The 1943 copper penny has a similar history to the 1944 steel penny. Also minted in very limited numbers, this coin, too, was released into circulation erroneously. Therefore those that can be found today are worth a substantial amount of money.

As you can see, while some pennies are more valuable than others, 1957 wheat penny values remain fairly low. These coins were minted in their millions, making them quite common. As a result, serious coin collectors and dealers know that they are not in very high demand and do not hold a very high value.