In this guide we’ll look at the best Dobsonian telescopes.
We’ve compared image quality, portability & magnification and cost
to give you our top recommendations.

What Is The Best Dobsonian telescopes? 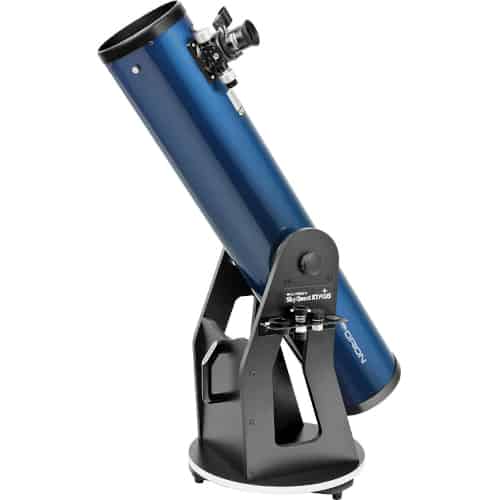 The Orion 8974 SkyQuest XT8 is a fantastic scope—its 8” aperture lets in tons of light and yields stunning images, but it still remains reasonably portable! It makes an excellent upgrade from a smaller or less powerful scope, and it’s user-friendly enough to be a great first scope too.

The focal length is 1200mm and focal ratio is f/5.9—this ratio is on the “shorter” side of moderate, which essentially means that the Orion 8974 SkyQuest is a versatile performer that can handle lunar and planetary viewing along with deep space, galaxies, nebulae, and star clusters.

The telescope has thumbscrew adjustments to help with collimation, though if you get serious about astronomy, I do recommend acquiring a laser collimator.

Its weight when fully assembled is 42 pounds. You can detach the optical tube from the mount for easier transportation (each piece weighs around 20 pounds). This is a very reasonable weight and size given the large 8” aperture, made possible by cut outs to reduce weight in the base.

Finally, I really like the 2” Crayford focuses on this scope; it’s a quality focuser that will help you lock onto objects smoothly and stay in focus.

The SkyWatcher is a computerized Dobsonian—many people find that automated telescopes are a real gamechanger! You can use the SynScan hand controller—with its vast database of 42,000+ objects—to locate and track virtually anything you want.

With a computerized telescope, you can relax and observe an object without worrying about manually tracking it and making adjustments. Of course, this kind of convenience does come with a higher price tag.

The SkyWatcher has an 8” aperture, 1200mm focal length, and f/5.9 focal ratio—just like the first telescope on this list.

It features a collapsible tube design that aids in portability. When fully assembled, it weighs around 55 pounds, but it can be more easily transported when disassembled into two compact items (base and optical tube).

This telescope combines the light-gathering power of a classic Dobsonian with the convenience and user-friendliness of GoTo technology.

With its generous 12” (305mm) aperture, the Zhumell Z12 Dobsonian allows in tons of light and generates spectacular images.

It has a 1500mm focal length and f/4.95 focal ratio, which is relatively “short.” This translates into beautiful wide-field views of space, allowing you to appreciate galaxies and nebulae in all their splendor.

You’ll also enjoy excellent views of planets such as Mars, Jupiter, and Saturn, as well as detailed close-ups of the Moon.

The Zhumell includes a laser collimator, which makes the process of aligning the telescope’s mirrors much easier. This scope tends to keep its collimation well and does not need constant adjustments. A cooling fan is also included for fast thermal equilibrium.

Although this telescope is quite heavy at around 75 pounds, it can be disassembled into two pieces for transport.

The Orion 10016 StarBlast is an excellent option if you’re seeking a balance between performance, portability, and price.

With its 5.9” (150mm) aperture and f/5 focal ratio, this telescope is capable of providing beautiful wide-field views. This “fast” focal ratio makes it less suited for high power, high magnification viewing, but you can certainly still enjoy good views of the Moon and planets like Jupiter and Mars.

Its compact design includes a tabletop Dobsonian mount. Weighing in at 23.5 pounds, this telescope is sure to get a lot of use. It’s easy to bring outside when the skies are clear or pack in your car for trips to stargazing events.

All in all, an awesome first telescope for a beginner or for anyone in search of a quality portable model.

With a 4.5” (114mm) aperture, this little telescope manages to let in an impressive amount of light. Its 450mm focal length and f/3.95 focal ratio make it best-suited for lower power, wide-field observation.

Finally, the Meade Instruments telescope weighs a mere 10.8 pounds. Its compact, portable design make it ideal for anyone who plans to travel often with their telescope. Plus, the Meade is quite straightforward to operate, making it a nice option for kids or beginning astronomers.

What exactly is a Dobsonian telescope? And why should you choose a Dobsonian over any other particular type of scope?

Dobsonians are named after John Dobson who popularized them during the 1960s. They are a type of reflector telescope, meaning that they use mirrors to gather light and produce images. Often known as “light buckets,” Dobsonian scopes excel at observing faint, faraway celestial bodies.

They have a relatively simple design that makes them appealing to many beginner and at-home astronomers.

You can recognize a Dobsonian by its sturdy altazimuth mount. Altazimuth mounts are easy to operate; you can move them along two axes, up and down, right and left. Dobsonian telescopes have box-like mounts that provide great stability.

Reasons to choose a Dobsonian telescope:

They tend to be user-friendly: The simple design of a Dobsonian helps you get it up and running fast with minimal frustration.

They provide excellent value: Your money will stretch further with a Dobsonian telescope. This is because Dobsonian models offer large apertures at a low to moderate price point. Aperture is the telescope’s light-collecting region; a bigger aperture lets more light in, yielding clearer and more detailed images. With a Dobsonian, you maximize your aperture-to-dollar ratio.

Their mounts are sturdy and stable: A Dobsonian won’t shake or move at the slightest breeze. I also find that altazimuth mounts are often more intuitive to use than their equatorial counterparts (which move in alignment with the Earth’s rotation). Both kinds of mounts have their advantages, but I personally appreciate the simplicity and stability of an altazimuth Dobsonian mount.

They excel at observing dim and distant objects: If you’re captivated by swirling galaxies, nebulae, and star clusters, a Dobsonian is a fantastic choice. These scopes give viewers a window into the deep sky.

They can be bulky: One of the major benefits of a Dobsonian is a large aperture, but that typically means a correspondingly large telescope. The bigger telescopes on this list range from 50 to 75 pounds, which is quite hefty! However, it’s possible to find lighter-weight models (35 pounds and under) if that’s a priority.

The altazimuth mount is not ideal for astrophotography: Serious astrophotographers typically opt for equatorially mounted scopes, which allow them to follow the changing position of the object they’re capturing.

They require collimation: This is a feature of reflector telescopes in general, not just Dobsonian models. These telescopes use mirrors, which sometimes slip out of alignment. Collimation is the process of realigning them. Fortunately, this process is quite simple, and there are multiple video tutorials available to help you get the hang of it!

Factors to consider when choosing a Dobsonian telescope

Aperture is a measurement of the primary mirror of a reflector telescope. As I mentioned above, a larger aperture means that the telescope allows more light in. More light contributes to brighter, crisper, more detailed images.

Dobsonian telescopes are great because you get a lot of aperture for your money. A refractor telescope of similar size and image quality would be much more expensive.

Of all the telescopes listed here, the Zhumell Z12 Deluxe Dobsonian has the largest aperture at 12”. The Orion 8974 SkyQuest and the SkyWatcher S11800 also have large apertures at 8”.

Smaller, more portable telescopes often aren’t quite as powerful as heavier ones. That said, it’s important to choose a telescope that you can handle and will actually use regularly!

The Meade Instruments telescope is by far the lightest scope on my list at 10.8 pounds. The Orion 10016 StarBlast, which weighs 23.5 pounds, is also worth a look.

Computerized telescopes make locating and tracking thousands of celestial objects much faster, easier, and more convenient. If you’re looking for an automated scope, I recommend the SkyWatcher S11800.

No matter which telescope you choose, you’re sure to be in good shape with a Dobsonian! These light buckets do a phenomenal job of bringing the wonders of the night sky closer to you.